Hey, NEW BOOK OUT!!- "What Lies In Darkness" by Jessica Sorensen

Book 1, in The Shadow Cove Series 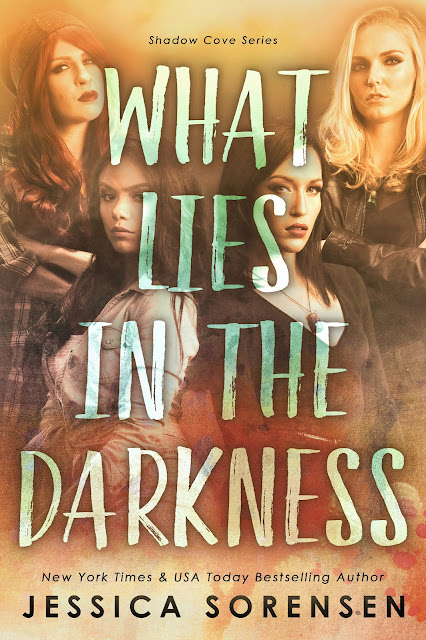 - SYNOPSIS -
A YA mystery series about four girls who live in the mysterious town of Shadow Cove.
Each book focuses on the girls solving a mystery, but there is a main mystery that continues throughout the series.
~~~~~~~~~~~~~~~~~~~~~~~~~~~~~~
In the mostly wealthy town of Shadow Cove, nothing is what it seems… When Makayla’s older brother, Sawyer, is found dead, the police rule his death a suicide. But her father, a reporter for the local paper, believes Sawyer was murdered and begins his own investigation to prove it.

Eight months later, he vanishes without a trace, and Mak is left trying to live a normal life in a town that ridicules her family. All she wants is a little bit of normalcy, so when an opportunity arises to participate in the local skateboarding charity event, Mak grabs onto the chance to do something she used to enjoy doing.

In order to pay the pricey entry fee, Mak decides to call a number on a reward poster for a lost laptop, figuring she’ll be able to make use of the mystery-solving skills she picked up from her father.

With the help of her three best friends, she begins searching for the missing laptop. But what starts out as a simple case, ends up turning into a mystery full of twists and turns that show a darker side of Shadow Cove.