Hey, It's A Release Blitz for "Darkness Savage" by Rachel A. Marks

by Rachel A. Marks

- SYNOPSIS -
The fate of humanity hangs in the balance as Aidan faces a crushing choice: give in to the demands of the forces of Darkness in order to save his sister, Ava, or fight on the side of good and risk losing her forever. With so much at stake and so little time, Aidan embarks on a mission to finish assembling a team of “Lights,” other teens whose special abilities are linked to his own.

Meanwhile, Rebecca discovers that she’s more than just a normal teen, and that the power awakening inside her may be stronger than she ever could have imagined. As the city plunges into chaos and Aidan doubts his plan of attack, Rebecca’s newfound gift may tip the balance in the wrong direction.

My Thoughts: Secret Power Becomes Secret Weapon!
Since this is the final novel in the Dark Cycle Series be prepared to be amazed, terrified, happy and yes in tears. A reader of this series will not be able to stop from being overwhelmed with emotions in saying goodbye to such a wonderfully crafted series dealing with relationships, magic, love, loss, angels and demons. This story is by far the most emotional out of the three in the series and yet I was still able to finish the last page with a smile on my face.

Faced with no choice but to fall into his little sister Ava's traps, Aidan fights with the demons sent to him under her command. However, those encounters happen in broad daylight in view of witnesses including cameras. Aidan is now forced into hiding while he plans his next move, which may mean destroying Ava, the one person he promised to always protect. With so everything and everyone he loves on the line, Aidan seeks to unite his team of lights, which includes Rebecca. Thinking she gave all she was to Kara in the transfer, Rebecca is adrift and doubts she is of any value to Aidan. But when strange occurrences happen that point to Rebecca still being a part of Aidan's group because of a special gift hidden within her, none can deny she maybe the most important part to saving everyone. The question is will Aidan be able to unit his lights in time to take on the Darkness that his sister has fallen to and will he be able to do what must be done to save the world?
Overall, great ending and I'm so sad to say goodbye to this series. I honestly was not expecting to cry but I totally did a couple of times. So I highly suggest hiding when reading this because you're not going to want to be interrupted, trust me almost killed my brother for bothering during an intense part. Aidan is a true hero, his only fault is love and trying to save everyone. The fact that the kid (because he's like 18) is willing to sacrifice himself time and again for his friends and family is inspiring. So when he does a few thing that hurt him to the core, I cried for him since I know I couldn't have done what he did even to safe humanity. Oh and Rebecca grows in this novel, showing all she is to readers, from the broken 'Who am I?' to 'I'm worth it'. Rebecca hadn't been my favorite because she was a wrench in Aidan and Kara's relationship, but love and understand her after this novel, plus she has her own man now so now fear of hurting Aidan and Kara. So if you're a fan of the paranormal and supernatural you'll enjoy this series and if you've read the previous novels you're in for a great finale.
--------------------------------------------------------------- 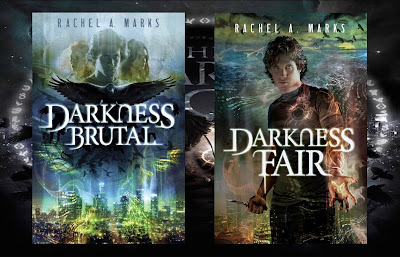 Rachel A. Marks is an award-winning author and professional artist, a SoCal girl, cancer survivor, a surfer and dirt-bike rider, chocolate lover and keeper of faerie secrets. She was voted: Most Likely to Survive the Zombie Apocalypse, but hopes she'll never have to test the theory. Her debut series The Dark Cycle, described as Dickens' Oliver Twist meets TV's Supernatural, is now out through Skyscape, beginning with DARKNESS BRUTAL.