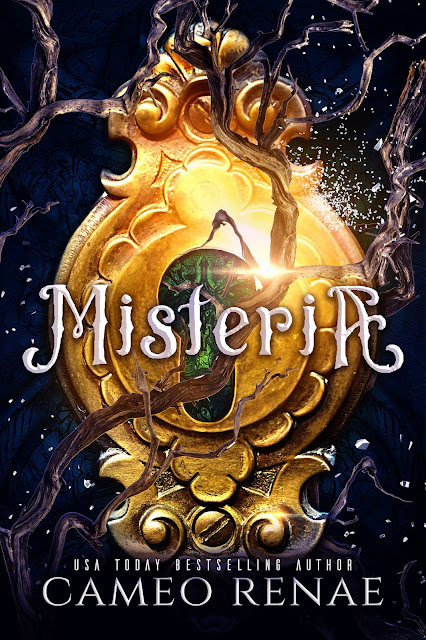 - SYNOPSIS -
Approached in the woods by a rather hideous, three-foot tall man-creature, William and Anna Archer, are given a message from their mother via a crystal ball. They are to follow the messenger through a magical portal to find her.

In this modern-day fairy tale, the twelve-year-old, telepathic twins uncover a world hidden behind an enchanted mist conjured by five sorcerers to protect all magical beings from the human world. A world that is now terrorized by a dark and destructive force sweeping across the land, threatening their very existence. 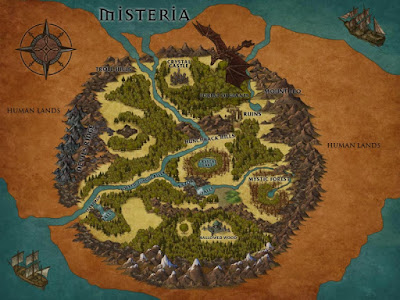 EXCERPT
e
CHAPTER ONE
​
Rustling leaves and cracking branches alerted twelve-year-old twins, William and Anna, that something or someone was in the woods, but an overgrowth of foliage concealed the mysterious intruder.
High up in their favorite tree, in the middle of their fifteen-acre forest, Will pressed a finger to his lips, then leaned over, peeking through leaves to spy down at whoever was coming.
The twins lived with their mother in a quaint little cabin in the remote north, fifty miles from the nearest town. They didn’t have many neighbors, so Will anticipated his best friend, Henry Hobbs, to jump out in an attempt to scare them.
Pulling a small stone from his pocket, Will held it in his palm and glanced at his sister with a sly grin.
Anna sighed and shook her head as he cocked his arm back.
“Hey, Henry! We know it’s you. You can come out now,” he yelled.
“Do you think it’s Henry?” she whispered.
Will tipped his head to the side and rolled his eyes. “Who else would it be? His dad bought him binoculars for his birthday. He’s probably got them focused on you right now.”
Anna growled, her face flushing red. “Don’t you dare encourage him, Will.”
“I don’t.” Will chuckled. “Henry likes you, but he also knows you only like him as a friend. Besides, you’re the only girl he’s ever known.”
“Well, I wish he’d stop staring. It’s creepy.”
“He’s harmless.”
The rustling in the woods drew nearer, making Will’s smile broaden. Readying the stone in his hand, he saw an unusual head peek out from the shrubbery below.
Anna let out a blood-curdling scream. Flinging her body over to Will’s branch, she nearly knocked him off. At the same time, Will hurled his rock downward, smacking the intruder on the head.
“Ouch!” it cried.
A hideous looking man-creature stood at the foot of their tree, rubbing his noggin. He was three-feet tall with an unnaturally large head, an oversized nose, and enormous feet covered in hair. His skin was dark and leathery and there were a few grotesque bumps on his face—some with long, wiry hairs winding out from them.
Will was frozen with fear.
The creature stood there panting; its breath, loud and wheezy. One hand was pressed against the base of the tree, while the other wiped beads of sweat from its bushy unibrow. Tightly gripping its chest, the despicable thing looked as if it was about to keel over and die.
“Chil’ren of Archer?” it puffed in a raspy voice.
It knew their name.
“Who are you?” Will hollered, his trembling voice gave away his fear.
“Name’s Tobin,” the creature replied, then bowed his head. “Tobin at yer service.”
Although the man-creature had a freakish exterior, Will noticed something odd about his brown, lemon-sized eyes. They appeared kind and friendly, yet filled with distress.
“What do you want?” Will asked, attempting to pry Anna’s fingers from around his arm.
Frantically waving his stubby arms in the air, he motioned for them to climb down. "Please, chil’ren. Ya must come at once. We’ve only but a short time ta get back an’ help yer mudder.”
Will felt his sister trembling and turned to see fear in her widened eyes. Anna was usually a spitfire and headstrong, but Will had never seen her so afraid. Although he was just as frightened, he knew he had to be strong. For both of them.

William Archer was born seven minutes and eleven seconds before his sister. He was the first to walk, was extremely fast, and exceptionally coordinated. Light-brown hair fringed his oval face, and he had the brightest sapphire eyes.
At the age of seven, his mother gifted him a beautiful hand-carved bow and quiver of arrows. She said they were his father’s, so he cherished them even more. It was the only thing of his father’s he’d ever possessed, and he practiced every chance he could. In no time, he was able to shoot a bullseye from fifty yards away.
Most of Will’s waking hours were spent outside in the woods, climbing trees and exploring, while his twin sister, Anna, was the complete opposite.
Anna had long, silky auburn hair that curled around her heart-shaped face and down her back. Her skin was soft and smooth as porcelain, and behind long lashes were the brightest emerald green eyes.
She didn’t like climbing trees or playing in the forest, but some days she’d give in, just to keep Will from nagging. Anna preferred lying in the grass with her head buried in a book, dreaming of what it would be like to be swept away on a wondrous adventure.
They didn’t know much about their father, aside from the fact he’d died before they were born. Their mother didn’t talk much about him, and they never really asked, seeing how much pain it brought her to mention him. What they did know was that he was very handsome and strong, with sapphire eyes like Will, and Anna’s intelligence.
Will and Anna seemed like typical twin siblings, with one exception. They shared a secret.
Since the day they were born, they could communicate with each other without speaking a word. All one had to do was think and the other could hear as clearly as if they were speaking out loud. Their mother learned of their unique gift when they were around the age of six, and made them promise never to tell anyone.

​
“Where is our mother?” Will shouted down at Tobin.
“She’s gone through da portal, but she’s sent me ta fetch ya. Hurry chil’ren. Hurry!” Tobin bellowed with growing anxiety. “We must be quick, or we’ll not get back in time.”
Will’s growing anger quickly overshadowed his fear. “What have you done with her?”
“I’ve done nothin’. Promise! Look now. She wanted me ta give dis ta ya. A message from yer mudder.”  Tobin reached into a satchel around his waist and pulled out a crystal ball—about six inches round—and held it in his palm. “Look. Look fer yerself.” He was on his hairy tiptoes, holding the ball up as high as he could.
Will wasn’t sure what to make of the situation, but he knew if that little man tried anything, he could take him down.
They cautiously climbed out of the tree, and when they reached the ground, Will stepped forward and took the ball from Tobin’s outstretched hand, pushing Anna behind him.
“What do I do with this?” he asked, shaking it like a snow globe.
Tobin grabbed hold of Will’s wrists and steadied them. “Look,” he whispered, then softly blew onto the crystal ball.
A dim light began to flicker within, and then a figure appeared in its rounded surface. It was their mother.
“Will. Anna,” she spoke determinedly. “I know you must be frightened, but you mustn’t be. I need you to trust me and listen very carefully. I had to return to my world, but have sent you Tobin, an old friend from years past. He will bring you to me, so do whatever he asks. You can trust him. I’ll explain everything when you get here. Please move with haste, and don’t be afraid. I’ll see you soon. I love you both so very much.” She blew them a kiss and quickly faded.
“Wait,” Will yelled, shaking the crystal ball. “Mom!”
But it was too late. Her image had vanished, and the ball was empty.
Tobin quickly grabbed the ball from Will’s hand and tucked it back into the satchel.
“Tis only a message. She can’t talk back ta ya,” he said shaking his head. “Do ya see now? Ya must hurry if ya wish ta see her again.” He pivoted and waddled away at a quick pace. “Foller me, chil’ren,” he called back over his shoulder.
Will nodded to Anna, deciding to follow, but stayed a cautious few yards behind.
Before they reached the edge of the woods, Will noticed a giant glowing orb hovering in the doorway of their cabin.
“We must enter before da portal shuts,” Tobin pressed as he neared the bright sphere. “Come now!” As soon as he touched the light, he vanished.
Anna stopped, frozen in place as they reached the stairs. “I don’t think we should go. What if it’s dangerous?”
Will took a deep breath, then exhaled. This was all happening so fast … much too quickly to think clearly or make an educated decision. More than ever, he wished his mother were here.
The glowing orb’s light dimmed, and a faint, pleading cry called from within.
“Hurry, chil’ren! If ya don’t come now, ye’ll never see yer mudder again.”
Will wrestled with his own fears, wondering if they should risk going through the portal. Was their mother really on the other side?
He sucked in another deep breath, turning his attention to his sister. “I don’t know what’s going to happen, but if this is the only way we can see mom again, we have to do it.” He turned to her and held out his hand. “But we have to do it together.”
She hesitated, her eyes welled with tears.
“Are you with me?”
Anna wiped her cheeks dry, then took hold of her brother’s hand. “Yes.”
Together, they stepped toward the orb. 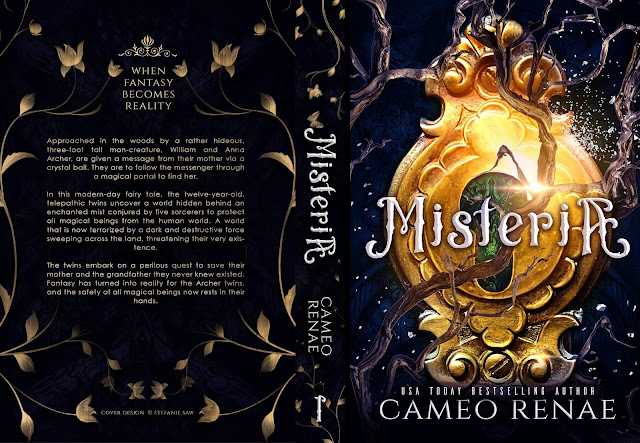