Hey, It's A Blog Tour for "Under Ground" by Alice Rachel - SYNOPSIS -
Love is a taboo, a mere fantasy— foreign, unreachable, and dangerous.

Raised in a society where women have no rights, seventeen-year-old Thia Clay holds little hope for a bright future. When her parents sell her into marriage to elite member William Fox, Thia slowly gives in to despair. William is nothing but a cruel, selfish young man with no other interest than to serve his own.

Born illegally and forced to hide from the authorities his entire life, nineteen-year-old Chi Richards is an active member of the Underground—a rebellious group seeking to overthrow the government.

Chi only has one goal—to rescue his parents from the work camp they were forced into.

Meeting Thia was never part of the plan, and neither was falling in love with her. 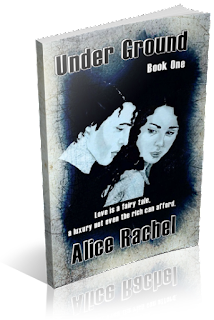 My Thoughts: "Pretense and Silence are a woman's only protection in this world."
Truly this novel was both intriguing and disturbing only, because I'd hate to live in a Dystopian world like this novel. Seriously I was at first rather unsettled by the state of the main characters life but the story evolved into so much more. The novel covers a variety of topics such as woman's rights, relationships, abuse, exposing corruption, and seeking justice.

In post world flood, New York has succeeded and re-established itself as its own country, borders and rules. Inside this new world seventeen-year-old Thia Clay, lives in a time where the woman out number men but men make the decisions. Thia has been taught her life's purpose is to hopefully marry and obtain a higher status in society. So when Thia is introduced to her match, William, she is pressured to ensure he will agree to keep her. The life Thia is meant to live is suffocating her and there seems like no escape until she sets eyes on a boy. It's forbidden to engage with a boy whom she is unfamiliar let alone the boy she is not engaged to, but when Shi talks to her Thia feels alive. Shi introduces Thia to a whole new vision of what life, love and society is all about. But their hidden affair can't remain forever and Thia must decide what she loves or fears most.
Overall, good read definitely dark and thought provoking. Thia as the female protagonist grew over time in the book from helpless to a strong woman. Seeing as the story is told from Thia's POV a reader gets a good understanding of her character and all the emotions she develops amidst her engagement to fleeing and joining the resistance. My only regret with Thia is really on the side of always forgiving Shi about his lying. Shi lies a couple times about physical something somethings and it irked me that Thia would brush it off. But then I remembered they are only 17 soo. Plus not gonna lie Shi never connected well enough for me. He was too shady in withholding info and then his emotions let his anger get out of control too fast making him volatile, not with Thia but still too close. All that aside, perhaps the sweetest development was a surprise mending of relationships between Thia and her . . . (I won't spoil) but I cried a bit because I had written that character off in the beginning as cruel and snooty but they had a heart and loved Thia after all. So if you are up for a dystopian read where the woman are many men are few and the people are segregated into harsh social status, then this book will interest you.
******************************************************
GIVEAWAY
a Rafflecopter giveaway
-------------------------------------_________________________________-----------------------------------
Alice Rachel
Author Links: Amazon Page, Facebook, Website, Twitter, Goodreads.

Alice Rachel is the author of the YA Dystopian ROMANCE SERIES “Under Ground.” Originally from France, Alice Rachel moved to the United States ten years ago to live with her husband, and she now also shares her home with two really old foster guinea pigs. Alice enjoys books of all kinds and more specifically those introducing well-written antagonists and complex protagonists. Alice also loves to draw her own book characters. The first book of her series “Under Ground” came out in October 2015, and the sequel will be out later this year. Alice loves to interact with all readers, so feel free to send her a Tweet.
Posted by hey, it was free at 4:00 AM