Hey, It's A Blog Tour for "Daughter of the Sun" by Zoe Kalo

Book 1, in the Cult of the Cat Series
"Daughter of the Sun" 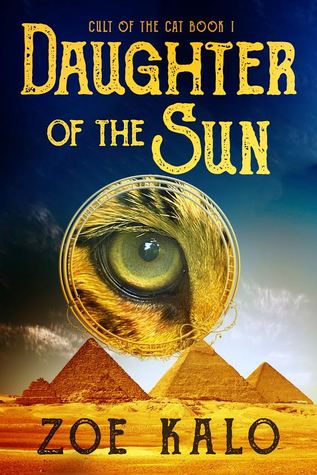 - SYNOPSIS -
Sixteen-year-old Trinity was born during a solar eclipse and left at the doorsteps of a convent along with a torn piece of papyrus covered with ancient symbols. Raised by nuns in the English countryside, she leads a quiet life until she’s whisked away to the Island of Cats and a grandmother she never knew.

But before they can get to know each other, her grandmother dies. All that Trinity has left is a mysterious eye-shaped ring. And a thousand grieving cats. As Trinity tries to solve the enigma of the torn papyrus, she discovers a world of bloody sacrifices and evil curses, and a prophecy that points to her and her new feline abilities. 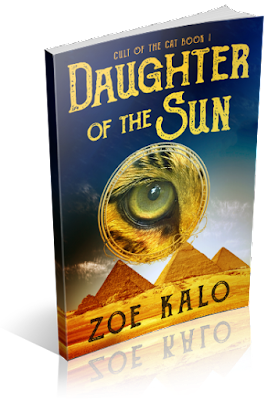 My Thoughts: And You're Gonna Hear Her Roar!

Great first novel in this new series dealing in Egyptian mythology! A lot of books tend to focus on Roman and Greek but this does Egyptian ancient myths justice. Definitely looking forward to more from this young adult series that entertains and subtlety educates.
Having grown up in a covenant in England with only one friend, Trinity is surprised to receive a visitor. When this visitor Dr. Nassri delivers news to Trinity revealing she is the long lost granddaughter of Margaret Walford a wealthy but sick woman living on the Kedilerin Ada island. Trinity finds herself whisked away to a new life on this island of cats. But instead of finding peace and answers more questions surface. After the death of her grandmother, Trinity begins to feel odd having new sensations and heighten abilities she's never had before. It's clear something is happening to her and Trinity doesn't know who to turn to for help. Once Trinity is explained her family history and its ties to the gods of Egypt, it's clear the stories aren't myths of old. Now Trinity must learn what her destiny is and help stop the evil she can feel is growing close.
Overall, great book! I'm a big geek for all thing mythology, so this book was entertaining. The more popular form of mythology is Greek and Roman but I've enjoyed Egyptian as well since it's just as complex. I think most steer clear because of the name difficulty in being more complex than simple Zeus. Now, Trinity is definitely a heroine. Poor girl, literally, becomes rich and still stays humble only wanting to find out the truth and help others. Plus she is changing which seems worse than puberty, so props to her for not going crazy. I'm glad Trinity finds a friend in her cousin Ara, because she'll need someone to lean on and talk girl stuff out with. Oh and I loved the epic show down I the end with Trinity versus her enemy, great fight and emotional ending even if I wanted the bad person to die. So if you're looking for a young adult book based in Egyptian mythology about a girl loving cats and trying to find out who she and what she will do on the world, than this book should interest you.
******************************************************
GIVEAWAY
a Rafflecopter giveaway
-------------------------------------_________________________________-----------------------------------
Zoe Kalo
Author Links: Facebook, Website, Twitter, Goodreads.

A certified bookworm, Zoe Kalo has always been obsessed with books and reading. Reading led to writing—compulsively. No surprise that at 16, she wrote her first novel, which her classmates read and passed around secretly. The pleasure of writing and sharing her fantasy worlds has stayed with her, so now she wants to pass her stories to you with no secrecy—but with lots of mystery… A daughter of adventurous expats, she’s had the good fortune of living on 3 continents, learning 4 languages, and experiencing a multicultural life. Currently, she’s working on a Master’s degree in Comparative Literature, which she balances between writing, taking care of her clowder of cats, and searching for the perfect bottle of pinot noir.
Posted by hey, it was free at 7:00 AM