Hey, It's A Cover Reveal Blitz for "His Majesty's Measure" by Pamela DuMond, 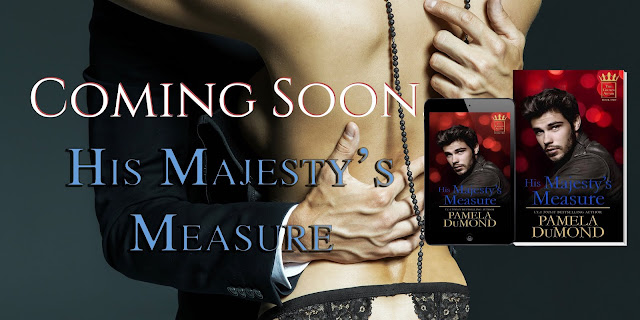 Today I stand in front of the Royal Cathedral not as a ruler—but a servant.

I serve as my brother’s best man. I smile when Max vows to take the fetching American commoner as his wedded wife. I hold the rings until it’s time for him to slide the gold band on Vivian’s bare hand. I applaud with the rest of the guests when he lifts the veil and kisses her full, lush mouth.


I will toast him at the reception, act bored during their first dance, and probably shack up with one of the bridesmaids at the end of the night to drown my sorrows.

I, Leopold Edward Rochartè, am the Crown Prince of Bellèno. I couldn’t have fallen in love with my brother’s bride-to-be. Or could I?

His Majesty's Measure © 2018 by USA Today bestselling author Pamela DuMond is the re-imagined, sexier version of Royally Wed © 2016 that was originally written and published by Pamela DuMond in 2016. Additional content has been added to the original story.

Pamela's also a chiropractor specializing in working with children, as well as people living with chronic pain. She lives in So Cal with her silly, demanding, and ridiculously cute cats.