. 1
Price I Paid: Zip,**I received a free copy in return for an honest review**
My Rating: 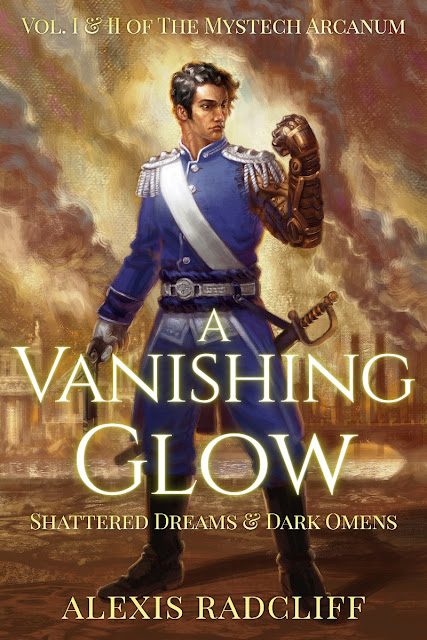 My Thoughts: New World With Machines, Mystery And Mutiny.

The genre of steampunk is still new to me but it's one that I'm discovering can be amazing if written well; And Alexis Radcliff delivered a great new world for readers to enjoy. Set in an era reminiscent of Regency with Lords and Kings ruling during a Industrial Revolution, the story takes readers through a series of events that will leave you wanting more.
Told from main characters perspectives who are central to the two plots developing; One perspective is for the underlying plot, which will flow into the next book and the second is central to the main plot in this book.
Called upon by the new High Sovereign of Ghavarim to become the realms new Lord Regent, Jason Tern, accepts the new position and comes to the aid of his friend, Nole. Jason hopes to help  settle the growing tensions between the 5 kingdoms of the Federation along with balancing the continual power struggle between the East and West. However, events occur all to quickly and death surrounds the politics in Ghavarim's Capital. Jason is soon left alone to ferret out who is behind all the uprisings and unrest in the Federation, all while dealing with his personal grief. Finding his task of seeking justice too much for him alone, Jason turns to unlikely partners and with his Windriders seeks to stop an uprising and more.
Now all the while in the background a young sapper, or explosives specialist, named Nilya Valsu, is determined to become a recognized Crimson Fist engineer. Nilya ran away from her home, love, family duties in the hopes of starting new life. Content for the most part in her new life, Nilya is suddenly sent away on a secret mission with a group of soldiers to help ferret out rebels. It's only later that Nilya uncovers she used and lied to for some unknown purpose. Now she is faced with a life in her hands and decisions that are life changing.
Overall, I enjoyed the book. The scenes and world the story enfolds in is a mix of futuristic fantasy and past regency. The author did really great in using imagery to help the reader understand what was and where it was happening, despite this world not existing anywhere but within these pages. I even loved the geographical map in the begin, which yes, I looked at studiously before reading (cause I'm that nerdy). Now My only issue that kept me from saying the book was perfect were the relationships. Breedlust is the term for whore, slut, rake and so on, while a Bedfellow is the term for their same gender friend whom they sleep with till they Join aka. get married to the opposite sex. I was okay with this setup but it left every situation and relationship up for questioning, example: What is the age they HAVE to join, Do they have only one bedfellow, and Were Nole and Jason ever Bedfellows? I have tons of those questions and none will probably be answered, or shouldn't, because the books aren't really about the relationships. However, because they played into the plot at various points the books relationship structure did make me pause here and there as I started to over think characters interactions. So if you are interested in a world where Lords rule and people live with mechanical limbs all while working and living in a time of Industrial revolution, then this book will be intriguing for you.