Hey, It's A Book Tour for "Get Real" by Tellulah Darling 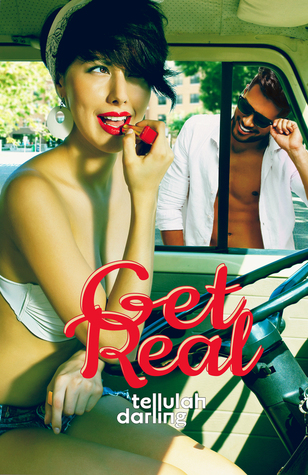 Synopsis:
Magic and Mayhem in Manhattan

Francesca Bellafiore comes from a nice Jewish family — one that happens to have magical powers. Underneath her good-girl exterior, though, she’s a wannabe badass with dreams of becoming a paranormal detective.

Party boy Rafael Muñoz does everything possible to publicly disappoint his high profile father. Privately, it’s a different story. His carefully crafted bad boy reputation masks the fact he’s a master illusionist, forced into solo covert ops. The role is wearing thin and Rafael longs to be part of a team.
When Francesca and Rafael meet, it’s love at first sight… For about five minutes. Rafael is spectacularly attractive—and, Francesca discovers, fully aware of the fact. Rafael knows from experience that girls like Francesca are more trouble than they’re worth.

So it sucks big time when they’re caught in a web of magic, minions, secrets, and enough sexual tension to power NYC. Their only chance to save the city and survive is to team up, trust each other–and maybe even fall in love. . .

My Thoughts: For Real Hotie vs. Real Smartie, Let the Games Begin!
Oh this book is definitely explosive, great action moments but even better moments between the two leads. When an Italian meets a Latino things are always hot, but add magic to the mix and it's volcanic. The chemistry in this book is steamy, so much so I'd suggest not reading this book amongst family. (Trust me it'll be awkward.)
Set in a world where you are either a Sapien, regular human, or a Cadabras, person born with magic. Francesca Bellafiore is a Bio, born from a long line of notable Healers. However, Francesca has one desire, which is to become a Cad detective, aka a Boiler. Not wanting to disappoint her family she finally decides to go along with the life planned for her. Until a certain boy with a reputation enters her life and winds up with her in a looped time zone fighting for their lives. Rafael Munoz is the reckless son to the head of MAGE, the organization in charge of protecting Cads worldwide. The only thing is Rafa isn't who he is portrayed to be, not really powerless but gifted in a unique skill, Rafa has been sent on solo missions for years. Awaiting the day he’d break free from his father, Rafa instead finds himself magically stuck with the one girl who makes him boil and yearn. Rafa knows that only as a team can they return to their families alive, problem is their attraction may just be the end of them first, before they can begin to get home.
Overall, chemistry alone I'd rate a 5, but based on character development the story is a 4. When Rafa finally caves to his desire and shows Francesca his shall we say "feelings", by using the ABCs. One word = HOT! Now I liked the book but felt as if there were one too many characters in the story for it develop properly. Basically, Francesca had too many BFFs, I would have loved more focus on one of them over having 3 just for the sake of more diversity. The author really put an effort to include multiple ethnicities, races, sexes and sexualities in her various characters, which was great; But it was just a bit too much for the first book. Hopefully, the second book will be easier to adjust to since everything has been introduced. Plus with that ending I'm hoping there’s more of Rafa and Francesca. So if you’re into hot Latino men who are sexy and know it, that love to rile up the woman they secretly love but can't admit it even if that woman is a Jewish Italian whom you don't ever wanna mess with night or day, than this is a good book to try. 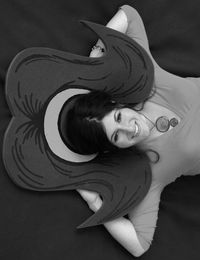 Sassy girls. Swoony boys. What could go wrong?
Tellulah Darling [NOUN]:
1) YA & New Adult romantic comedy author because her first kiss sucked and she’s compensating.
2) Firm believer that some of the best stories happen when love meets comedy and awkwardness ensues.
3) Sassy minx.
Both a hopeless romantic and total cynic, Tellulah Darling is all about the happily-ever-after, with a huge dose of hilarity along the way. Her romcoms come in a variety of flavours and heat levels.
Posted by hey, it was free at 3:00 AM