Hey, It's A Blog Tour for "Artificial" by Jadah McCoy 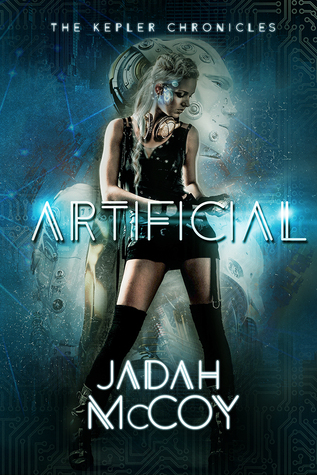 - SYNOPSIS -
"She struggles to feel human."

In 2256, the only remnants of civilization on Earth’s first colonized planet, Kepler, are the plant-covered buildings and the nocturnal, genetically spliced bug-people nesting within them: the Cull. During the day, Syl leaves her home in the sewers beneath Elite City to scavenge for food, but at night the Cull come looking for a meal of their own. Syl thought gene splicing died with the Android War a century ago. She thought the bugs could be exterminated, Elite city rebuilt, and the population replenished. She’s wrong.

Whoever engineered the Cull isn’t done playing God. Syl is abducted and tortured in horrific experiments which result in her own DNA being spliced, slowly turning her into one of the bugs. Now she must find a cure and stop the person responsible before every remaining man, woman, and child on Kepler is transformed into the abomination they fear.

"He struggles not to."

For Bastion, being an android in the sex industry isn’t so bad. Clubbing beneath the streets of New Elite by day and seducing the rich by night isn’t an altogether undesirable occupation. But every day a new android cadaver appears in the slum gutters, and each caved in metal skull and heap of mangled wires whittles away at him.

Glitches—androids with empathy—are being murdered, their models discontinued and strung up as a warning. Show emotion, you die. Good thing Bastion can keep a secret, or he would be the next body lining the street. 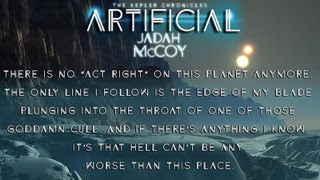 My Thoughts: Fighting For Humanity Against Robots, Mutants and Cyborgs!
Definitely a very fast paced action packed read, think Riddick meets Alien vs. Predators. The author illustrates a whole new futuristic world with multilayered issues wonderfully explored. I truly hope she continues with these characters as this could definitely be a series. I mean who doesn't like a bada$$ heroine kicking butt who just happen to be crazy androids and mutants?
Scavenging and trying to survive the harsh colonized world of Kepler is all that matters to the tattered remnants of humans. Living in what is left of the city of Elite, Syl, finds herself one day alone after retreating from her group. Knowing that Culls, part human - part bug or animal, are lurking in the night, Syl tries to return home but is abducted by something unknown. She awakens to find herself possibly spliced into the very things she fears the most. Breaking free from her captors, Syl finds herself out in a city with people living as if no war, disease, or Cull had ever touched them. So when Bastion happens upon Syl seeing her so unaware of her surroundings, he decides against his programming to check on her. Finding Syl is not an android like himself but is an Organic, Bastion makes a decision to help her which could mean possibly being caught as a Organic sympathizer. Despite the history between the two races, Bastion's offer of assistance is reluctantly accepted by Syl and with his help they begin to unravel the nature of what it is to be human and android as well as discover who and what may be the agitators in this on going battle of species dominance.
Overall, crazy amount of action, that keeps you reading from page to page. I've recently been on a Battlestar Galactica binge, so this novel was perfect for me right now. Not gonna lie, thought there was gonna be the whole cliche he's a robot and she's a human plot, but this author surprised me and blew that presumption out of the water, she even got me with a surprise ending. Syl is definitely a heroine who is headstrong but all her actions spur from a sense of justice and love. Now Bastion is a strange one because he is a male whore, literally, that's his robot job, but he's amazing at everything from piano to rescues to hacking so guess he is just amazing and can't do wrong. So in the end if you are looking for a great read involving a girl kicking some mutant butt working with androids possibly turning into something while fighting a cyborg and never giving up on her fight for human freedom, then this book will be a great.
******************************************************
GIVEAWAY 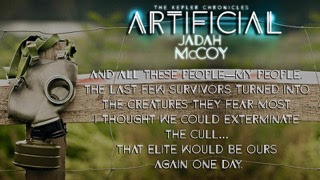 Jadah currently lives in Nashville, TN and works in law. When not babysitting attorneys, she can be found juicing her brain for creative ideas or fantasizing about her next trip out of the country (or about Tom Hiddleston as Loki - it’s always a toss up when she fantasizes).

She grew up in rural Arkansas, yet can still write good and sometimes even wears shoes! She did date her first cousin for a while but they decided against marriage for the sake of the gene pool.

Her true loves are elephants, cursing, and sangria - in that order. If you find an elephant that curses like a sailor whilst drinking sangria, you’re dangerously close to becoming her next romantic victim - er, partner.