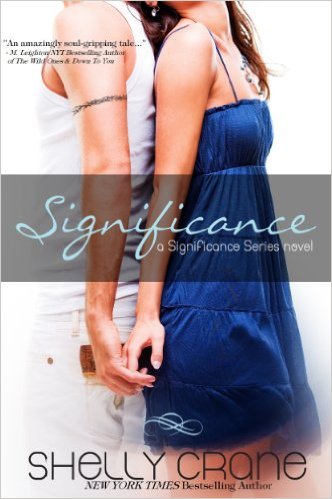 My Thoughts: Insta-Soulmate with Powers and Connections.

Definitely a good read but long, as author Shelly Crane introduces new characters who live amongst us humans. I'm all for long reads especially for beach days, but the story at times felt repetitive. However, I did fall for the male lead and totally wish I had a Caleb!
Graduating from high school should be a happy event filled with family and friends, but for 17 year old Maggie Masters the moment only highlighted how broken her family is and how uninvolved she became with her friends. Becoming unsocial happened around the time Maggie's mom ran and her longtime boyfriend dumped her senior year claiming it was best friends college plans in a year. So when a friend asks Maggie to come and celebrate after graduation Maggie agrees. It's on her way to meet up with the friend that she saves a boy from being hit by a car and in that moment her life is forever changed. The boy is actually Caleb Jacobson a college guy from out of town visiting Maggie's friend. The two have an instant connection that feels too unreal for her to understand. Caleb reveals they are each others significant, imprinted for life, they begin to feel each other's ever thing. Supernatural changes occur to the couple as they go through their bonding process and Maggie is brought into the family, but rival clans begin meddling putting everyone in danger.
Overall, good read just a bit repetitive. Maggie won the lottery with Caleb. Seriously her life was CRAP and then Caleb comes and its begins to brighten minute by minute. The only bummer is the rival clans constantly trying to harm and kidnap her. Oh and Kyle, her friend, being such a snot all the time because he wasn't the lucky guy to imprint with her. But Caleb he's a solid guy all the way. Again my only issue was the fact the situation of Maggie's in danger seemed overly drawn out when the book's timeline was only 9 days. Which in 9 days if you almost get kidnapped after already being attack or cornered I'd think there'd need to be an offensive move instead of being on constant defense. Honestly, I was waiting for an epic fight scene having the Jacobson's kick butt and when there was one it was like barely a page. Now I'm most impressed with how Maggie's dad comes out of his funk and becomes a father again even if he's a bit late. So if you're looking for a YA book with a female lead who finds an instant soulmate who is the complete package that includes family, undying love, wealth and powers then this book will be a good pick.
Posted by hey, it was free at 11:30 PM