NEW BOOK OUT!!- "The Chemist" by Stephenie Meyer 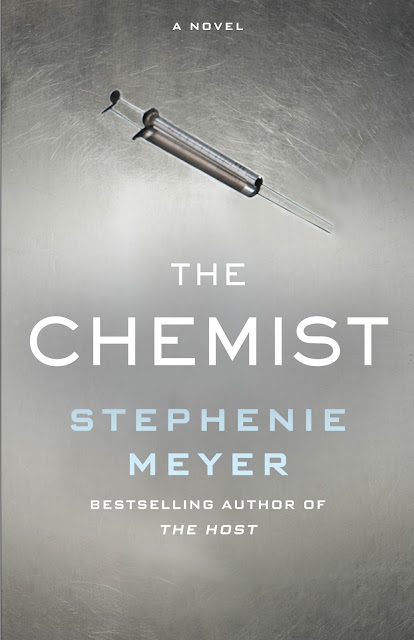 - SYNOPSIS -
In this gripping page-turner, an ex-agent on the run from her former employers must take one more case to clear her name and save her life.

She used to work for the U.S. government, but very few people ever knew that. An expert in her field, she was one of the darkest secrets of an agency so clandestine it doesn't even have a name. And when they decided she was a liability, they came for her without warning.

Now, she rarely stays in the same place or uses the same name for long. They've killed the only other person she trusted, but something she knows still poses a threat. They want her dead, and soon.

When her former handler offers her a way out, she realizes it's her only chance to erase the giant target on her back. But it means taking one last job for her ex-employers. To her horror, the information she acquires only makes her situation more dangerous.

Resolving to meet the threat head on, she prepares for the toughest fight of her life, but finds herself falling for a man who can only complicate her likelihood of survival. As she sees her choices being rapidly whittled down, she must apply her unique talents in ways she never dreamed of.
<<<<<<<<<<<<<<<<<<==========>>>>>>>>>>>>>>>
EXCERPT
Chapter 1:
Chris was ready, her denuded novels already stowed away in her backpack, when the teenage girl left to go find another source. Without jumping up or looking like she’d rushed, Chris was in the chair before any of the other lingering hopefuls even realized their chance had passed.
Actually checking her e-mail usually took about three minutes.
After that, she would have another four hours— if she wasn’t driving evasively— to get back to her temporary home. Then of course the reassembly of her safeguards before she could finally sleep. E-mail day was always a long one.
Though there was no connection between her present life and this e-mail account— no repeat IP address, no discussion of places or names— as soon as she was done reading and, if the occasion called for it, answering her mail, she would be out the door and speeding out of town, putting as many miles between herself and this location as possible. Just in case.
Just in case had become Chris’s unintentional mantra. She lived a life of overpreparation, but, as she often reminded herself, without that preparation she wouldn’t be living a life at all.
It would be nice not to have to take these risks, but the money wasn’t going to last forever. Usually she would find a menial job at some mom-and-pop place, preferably one with handwritten records, but that kind of job generated only enough money for the basics— food and rent. Never the more expensive things in her life, like fake IDs, laboratory apparatus, and the various chemical components she hoarded. So she maintained a light presence on the Internet, found her rare paying client here and there, and did everything she could to keep this work from bringing her to the attention of those who wanted her to stop existing.
The last two e-mail days had been fruitless, so she was pleased to see a message waiting for her— pleased for the approximately two-tenths of a second it took her to process the return address.
l.carston. 463@ dpt11a.net
Just out there— his real e-mail address, easily traceable directly to her former employers. As the hair rose on the back of her neck and the adrenaline surged through her body— Run, run, run it seemed to be shouting inside her veins— part of her was still able to gape in disbelief at the arrogance. She always underestimated how astonishingly careless they could be.
They can’t be here yet, she reasoned with herself through the panic, her eyes already sweeping the library for men with shoulders too broad for their dark suits, for military haircuts, for anyone moving toward her position. She could see her car through the plate-glass window, and it looked like no one had tampered with it, but she hadn’t exactly been keeping watch, had she?
So they’d found her again. But they had no way of knowing where she would decide to check her mail. She was religiously random about that choice.
Just now, an alarm had gone off in a tidy gray office, or maybe several offices, maybe even with flashing red lights. Of course there would be a priority command set up to trace this IP address. Bodies were about to be mobilized. But even if they used helicopters— and they had that capability— she had a few minutes. Enough to see what Carston wanted.
The subject line was Tired of running?
Bastard.
She clicked it open. The message wasn’t long.

Policy has changed. We need you. Would an
unofficial apology help? Can we meet? I wouldn’t
ask, but lives are on the line. Many, many lives.

She’d always liked Carston. He seemed more human than a lot of the other dark suits the department employed. Some of them— especially the ones in uniform— were downright scary. Which was probably a hypocritical thought, considering the line of work she used to be in.
So of course it was Carston they’d had make contact. They knew she was lonely and frightened, and they’d sent an old friend to make her feel all warm and fuzzy. Common sense, and she probably would have seen through the ploy without help, but it didn’t hurt that the same ploy had been used once in a novel she’d stolen.
She allowed herself one deep breath and thirty seconds of concentrated thought. The focus was supposed to be her next move— getting out of this library, this town, this state, as soon as possible— and whether that was enough. Was her current identity still safe, or was it time to relocate again?
However, that focus was derailed by the insidious idea of Carston’s offer.
What if  .  .  .
******************************************************