Hey, It's A Review Blog Tour for "Soul Finder" by Jacinta Maree

- SYNOPSIS -
Since being discovered as Soulless, Nadia has become a target for both terrorist groups and government corporations. Now, her only hope for survival rests in the hands of the man sent out to kill her: Diesel, the Mad Dog terrorist.

Diesel is determined to free himself of the never ending curse of reincarnation and the haunting memories that plague his mind. But when his search leads him to Nadia, a greater desire stills him from taking her life.

Unable to see into Diesel’s cracking mind, Nadia instead puts her faith into his strength, fueled by eleven generations of unmatched rage and insanity. Their tight-rope relationship balances the two between life and death, love and rage, trust and betrayal.

Tension pulls at the hems of their dangerous companionship, and as time runs out all madmen must eventually make their choice.

Book two of the thrilling Immortal Gene series dives deeper into the danger of trusting your heart over your head.

<<<<<<<<<<<<<<<<<<==========>>>>>>>>>>>>>>>
EXCERPTS:
**EXCERPT #1**
Diesel slowly stood. “I have been thinking a lot lately. About how delicate this situation is. I have had many experiences in hostage situations. But you are different. Difficult.” He stepped around the table. I shuffled back. His voice dropped and curled with a gentle accent that didn’t suit his pitch. A Russian accent, spoken through an English voice. Krane. He jabbed at his own temple with the gun. “You’ve done something to me. You’ve planted this desire in my head. Something I need to stamp out.” His eyes shot down and his eyebrows twitched, pinched by a thought.
“I need you to stay with me, Nadia. I have sacrificed so much for you. Don’t you get it? You and me, we are more than life. We are more than this. Without you I will crumple into ruins.” The earnestly behind his words shuddered his breath. Weakened his body. I blinked at the poetry of it. At first I thought I was the wax, bending and breaking within Diesel’s presence, but it turned out I was the flame. I was destroying him.
“You forget.” I turned the gun against my own head. “I know your weakness too.”

**EXCERPT #2**
Diesel threw his punch. It was fast and violent. As the thumping crack connected with the man’s jaw, blood spurted out, following the momentum of Diesel’s swing.
The second man rammed the stock end of his gun into Diesel’s ribs. Diesel stumbled and caught himself on the wall, holding his stomach.
Even as he buckled over, Diesel still managed to curl his voice. “Once I’m out, I am going to ram that gun down your throat.”
“You can go f** yourself!” The man checked his busted lip for blood before pointing the gun at my head. I pressed against the wall. “I don’t care who she belongs to. She’s dog food now.”
“Wait, he’s right. I’m valuable.” I held my hands up, palms exposed. “Scan me and you’ll see.”
Diesel swung back around as though I had just revealed explosives under my shirt.
“What?” The man with the bleeding lip laughed. “Scan you? Are you some Elite’s secret lover?”
“How could you possibly be of any use to us?” The other asked over the taunting.
I licked my lips, unable to understand the horrified scowl that tightened Diesel’s face. “I don’t have a soul imprint.”

**EXCERPT #3**
Beyond the bodies left on the ground was a line of faces huddled opposite us. There must have been another fifteen prisoners inside the bunker, easily outnumbering me and Diesel. They clung to each other’s elbows and hips, moving in a single awkward unit like a spider, long limbs and shallow eyes. All of them were men, with the exception of some that were mere boys, no older than fourteen. Dirty. Starving. Wild. They didn’t look at Diesel but watched me. I was suddenly aware that I was the only female inside the hole. That was, until the next prisoner dropped in.
A blonde girl fell through the roof, landing on her side. All at once fifteen pairs of eyes turned to her. I looked at her too. She squinted into the darkness, blinded as I was as the lid locked shut above her head. The wheel knob turned. She didn’t move. I pushed off to reach her first, but Diesel grabbed me and shoved me back. He covered my mouth again as though expecting me to scream. I wanted to shout at her to run. Hide. Arm herself.
Fifteen pairs of feet moved quickly. Diesel covered my ears.

**EXCERPT #4**
I shook my head. This must be a nightmare. This must be fake.
“This isn’t you, Diesel. This is Krane’s influence. You’re sick but once you get some D400 into you, you’ll be you again.”
Diesel’s voice tightened. “I’m not sick. Don’t you get it? Krane, Diesel, there’s no difference.”
My breath shuddered out. All this time, everyone referred to him as Krane but I had ignored it. All this time I was warned of Krane’s cruel capabilities but I was so certain Diesel wasn’t the same malicious person. But Krane wasn’t a separate entity held behind a wall of D400. It was just another name fitted to a different face.
I stepped back. “You’re disgusting!”
“Nadia.” He smiled as though I was joking. He reached out to touch me. I jerked away.
With all the coldness I could master, I gritted through my teeth. “Men like you remind me that there are such things as real monsters.”
My words hit something dark inside of Diesel and immediately he dropped his smile. “Hmm, so what do you call those that love monsters like me, huh? How disgusting are you then?”
He was right. We were a candle on fire, destined to destroy each other. He was a flame, clinging to me, not letting me go as I melted beneath. I could feel myself weaken in my core, my sides running with wax. The more the flame ate and picked me away, the further my body hollowed until all that was left were brittle walls melting into a puddle. Once I was gone, he’d snap shut into smoke.
“Maybe you are right. Maybe love really is just poison an idiot drinks.”
Diesel’s eyes narrowed. “Didn’t you say nothing could break you?”
“I’m not broken. You are. And this is a poison you can now drink alone.”
******************************************************
GIVEAWAY
a Rafflecopter giveaway 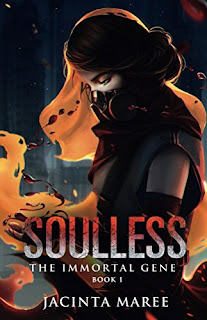 Born in Melbourne Australia, Jacinta Maree considers herself a chocoholic with an obsession with dragons, video gaming and Japan. She writes a variety of genres including YA paranormal, steampunk, horror, new adult, dystopian and fantasy. Winner of 2014 Horror of the year and bestselling author, Jacinta writes to bring enjoyment to others while fulfilling her own need to explore the weird and the impossible.