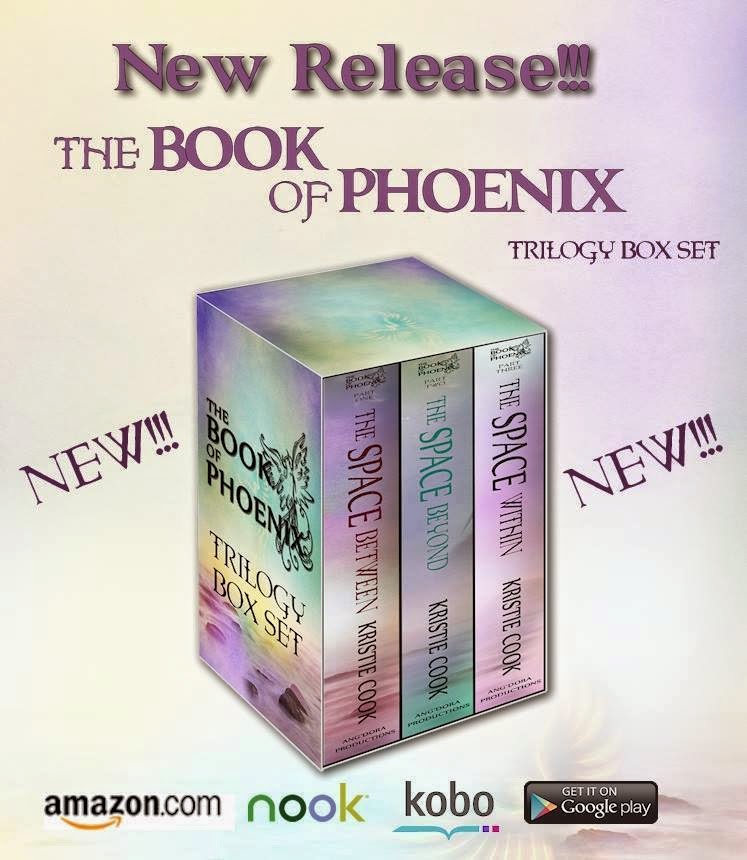 The Book of Phoenix—a leather-bound journal full of secrets, but only if you read between the lines. Discover those secrets and more in these three books with four love stories and an unexpected paranormal twist that will take your breath and have you flipping through the pages to learn more.

My thoughts: Great Series Now Packaged At A Great Price
A reader can't go wrong when they spend less money buying a whole trilogy in 1-click than they would if they bought each book individually. That's bargain book buying 101. Kristie Cook has made her BOOKS of Phoenix into a BOOK. You can now have them all at once, together in a bundle, instead of waiting around impatiently for the next one, like those of us early on fans. The price is the best part too, besides the story within that is, because even if you haven't read Kristie's books before, than this is a low stake gamble for buying some great books. And for those Soul Saver Fans you even get a little series cross over in book . . . . Hey, I won't spill any beans, cause you'll just have to read and see.

The Space Between (Part 1)
After a month-long dance tour overseas, Leni returns to Georgia to care for her great-uncle, only to find him gone, their home empty, and any evidence he ever existed wiped out. All that remains is her truck and a leather-bound book she can’t open. Nearly as disturbing, she keeps running into the deaf and dangerously sexy model she’d met in Italy, and no matter how hard she tries to shake him, her soul won’t let her.

Jeric has traveled the world in search of a piece of his past for over a year, only to reach a dead-end in Georgia … in the exact town where the beautiful dancer from Italy lives. He’s drawn to her like a moth to a flame, but his life as a loner in his silent world allows no room for girlfriends, and he tries to leave her. Except outside forces won’t let him.

When the same “tattoos” suddenly appear on their arms and the book’s lock falls open, Leni and Jeric realize there’s more between them than physical fascination. They must embark on a journey together to discover their connection to each other and their ties to the Book of Phoenix.

And they must figure it all out fast. Shadowy forms that are more monsters than men are closing in, while their own existences are crumbling around them.

The Space Beyond (Part 2)
As members of the Phoenix, Jeric and Leni are thrust into their new lives, expected to lead Earth’s Guardians. But Leni struggles with trusting her own soul, and Jeric is more concerned about keeping Leni safe than meeting others’ demands. When Darkness swarms Lake Haven, they embark on their first mission with little preparation and no idea which soul the Dark hunts.

Born and raised in Lake Haven, Bex hopes to escape her small-town life, ideally in the arms of her soul mate. She knows he exists, and her heart aches with the need to find him. When her long-lost mama calls to announce she's knockin' on death's door, Bex reluctantly makes the trip to see the uncaring bitch (bless her heart), only to be knocked off her feet by the sexy and charming Dr. Mason Hayes. Is he really The One?

Leni’s soul felt an instant connection to Bex, but if Bex found her soul mate, she isn’t their mission. So who is, and why does Leni instinctively feel drawn to her? Can Leni even trust her intuition? And will Jeric step up and lead when the time comes or continue to hold them back?

If they don't learn to trust themselves and each other quickly, Darkness will claim them all…along with the rest of Earth’s souls.

The Space Within (Part 3)
Completing a mission that reunites Guardian Twin Flames turns devastating when the Book of Phoenix throws Leni and Brock into a Dark world, leaving Jeric and Asia behind. They count on their other halves to rescue them, but when that doesn’t happen, they must fight through the Darkness and find a Gate that will take them home.

Except all of Earth’s Gates are sealed.

Enyxa, ruler of Darkness, and her horde of Dark souls storm the Gates to push their way through to Earth. While Leni and Brock fight Enyxa on their side, Jeric and Asia must figure out how to save their Twin Flames without jeopardizing all of Earth’s souls. Through it all—and with a little help from Enyxa—Brock and Asia begin questioning their relationship and whether they’re truly meant to be together…or if they’re two Lost souls forced to become one.

If the Broken dyads don’t find each other fast, they’ll be lost to the Dark forever. But to reunite means choosing themselves over all of Earth’s souls. Can Jeric make that decision? And will Brock and Asia find the love they both desperately crave? Or are they all doomed to perpetual Darkness?