"Romance Thursday": Suddenly a Bride (Across the Stars Book 1) by Ruth Ann Nordin 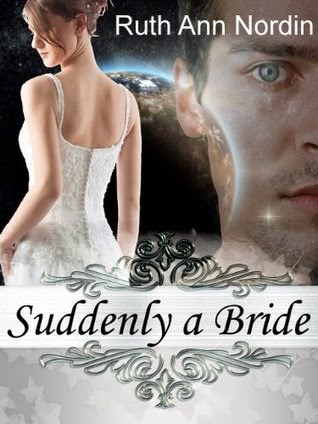 My Thoughts: Should Be Titled "Swiftly and Unknowingly Bonded For Life"

Honestly, I wanted to stop reading after the couple's first sex scene, but I persevered through the book to give the author a chance before I passed final judgement. The story had an interesting idea, but there was just a few too many issues I had with the book for me to say I liked it or would ever read the next book.
Rilo An, Pandoran, is shown to be wishing for a female life mate. All females on his home planet are extinct, so he had to save and buy a wish to have a chance at happiness, which to him is a life mate and children. He has no idea what awaits him on earth but takes the risk, becoming the earthling Chris West. Chris is sent to Caitlyn Davis and immediately sets about making her his life mate. **TINY SPOILER HERE** Basically the bond is made through sex and he attracts his mate by sending off hormones which make Caitlyn immediately horny and they consummate their bond in the backseat of her van. The rest of the story is about Chris acclimating to earth life and Caitlyn adjusting to a new man in her life. The couple obviously has issues to work through and a few bumps in the story happen.
Overall, Not too impressed. I enjoyed the dialogue and their relationship, but the sex was weird and really off putting from the beginning. I really dislike books with sex right off the bat, since you don't even know the characters first and then all of sudden their doing this intimate thing. I just couldn't stand the whole sex=bond thing for the alien species. Especially, since as Caitlyn glossed over the issue, but as her BFF so sagely put it, their "bonding" was like rape, since Caitlyn barely knew Chris and then all of sudden she was compelled to have sex with him, not asked but practically forced, not cool. Then there was the whole ejaculation thing with Chris that was weird too. The only saving grace of the book was the dialogue, I liked it but everything else was just too weird to take, and the author should seriously think about a rewrite concerning some of the alien stuff, it ruined the story in my opinion.