"Romance Thursday": Blood and Treasure: A Romancing the Pirate Novel by Jennifer Bray-Weber 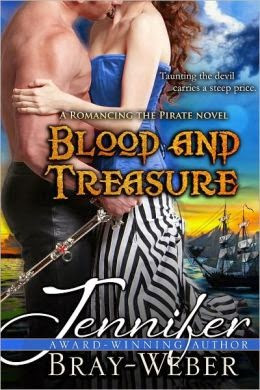 My Thoughts:  Classic Pirate and Damsel Romance With A Few New Twists.

So I will admit I grabbed this book solely due to the cover. It screamed classic pirate romance novel and I wanted to read a contemporary story to see how it fairs in comparison to my Grandma's romance novels from the 80's, you know the kind with the shirtless rogues on the covers. What I got was exactly that, there was a few twists thrown in to try and make the story more a novel than just a simple romance book, but it was still a struggle to get through this book. Pirate romances apparently aren't my genre.
Captain Zane Fox is the privateer pirate of the sea. He absconds with a tavern wench Miss Lianne Whitney who by chance has in her possession the special Serpent medallion. Zane was hired to retrieve the magical medallion but when he is faced with stealing it or grabbing Lianne and the medallion, he does the later and begins a strange adventure. Lianne is not a simple tavern wench who faints when scared. Instead Lianne is a tough woman from her years of life circumstances that have made her the perfect match for a pirate captain like Zane. Now perhaps the two could find happiness at long last if only enemies like Commodore Bennigton and ex-mates like Sadie Greene would leave them be then maybe a HEA would be on the horizon.
Overall, after giving the story time I found it okay, definitely not impressed or overly excited about the story. In fact I almost stopped reading after the first couple chapters. The story fluctuates between the perspectives of the main characters and its not shown you're switching character perspectives, so that was a bit off putting. The story itself was just cheesy at too many parts, such as a couple girl fight scenes, one of which literally included a pillow fight. I mean really?! It made me wonder in those scenes if the book was written as a RomCom or for men, because it was just sad, in a pathetic kind of way. Lianne was supposed to be the heroine but she was always talking about how her resolve was broken because of how hot he was or looked. And the "love" scenes were also awkward to read because the words exchange were just, I hate using the same word, but they were cheesy. So no I wouldn't read this book again and will not be grabbing another book that screams classic pirate romance novel. I've leaned I'm not into pirate romances. But hey if you want a pirate romance where a girl wants the man but doesn't yet does and they get it on during a roaring storm, then this book could be right for you, but it wasn't for me.
Posted by hey, it was free at 11:30 PM