"Misc. Monday": The Crown in the Heather (The Bruce Trilogy Book 1) by N. Gemini Sasson 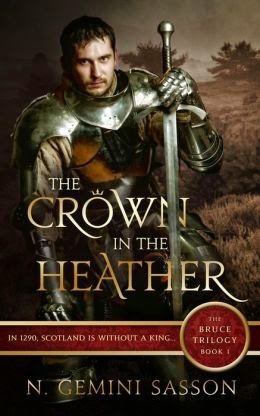 Historical Fiction is not the same as Historical Romance. Yes, there is some romance in this story, but it is not the main point of the story. So if you are looking for that, then this is may not be your type of book. However, if you are looking for a book pertaining to Scotland in the 14th century about it's history and the drama that enfolded between England and Scots then this a great choice.
The story begins in a later time when Robert the Bruce is on the run with his band of people and family, with the English forces following them closely giving Bruce's weary forces no time to rest and collect themselves. The story then rewinds back in time to show readers how the main character's in the story found themselves where they are in the beginning chapter and subsequently later in the series that follow this book.
Robert the Bruce is shown to have been groomed from a young lad to become the next king of Scotland by birthright or force. Sadly Robert has a long journey filled with love, loss and many battles that make it clear it takes more than love for his country and pure intentions that will earn him his right to the throne of Scotland. James Douglas is a a young boy who is shown all to soon in life how the English deal with Scots. James father once a proud Scotsman was forced into promises to save his land and life, but James will later learn through various ordeals that as a Scot the only place he need be is Scotland and that he will need to fight only for what is his and his alone because trusting others can be fatal.
The English antagonists are Edward I and Edward II. The king initiating the bloodshed and battles is Edward I, aka Longskanks. He has his mind set on subduing Scotland and it inhabitant, but the nobles all vie for the right to rule independently. Edward II is shown as the heir to England but is constantly put down by his father as sub-par and worthless. Edward has but one "friend" and his father disapproves of their relationship, leaving Edward's hatred for his father growing all the more. Edward only wants to destroy Scotland and Bruce so he can leave those lands and head back to England, and perhaps receive some recognition from his father and king.
Overall, I found this book to be a great piece of historical fiction. I'm usually always hesitant when reading this genre, because the authors are either spot on or way off, but this author did it right. Sure there are historical inaccuracies but nothing too outrageous that I'd be put off by this book and say this is B.S. No, in fact I can tell the Author cares for the subject matter and wanted to portray it accurately in a way people would be enraptured by the history and people. So give this book a go if you want drama and adventure about Scottish history without the "and his father and that place" humdrum, this book richly unfolds the tale of Robert the Bruce and I look forward to buying the next book in the series.