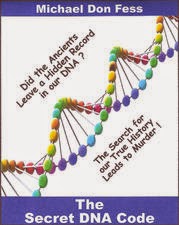 This book was definitely written based on an interesting concept which is: what if our planet's history was written and stored in our DNA? (cue alien creepy music) Seriously though unique idea, as far as SciFi goes, I had never heard of this concept or theory before reading this book and might go all nerd later and research a bit more on this topic.
As for the book itself, a reader is introduced to a wide array of characters from FBI agents to Saudi Attaches to the Grad Students who are most notably the main characters and everyone else's main objectives. Grad Student Boris 'Bo' Samaritan decides to try and unlock the secrets of worlds past in our very own DNA after hearing about research done in Europe where scientist put info like modern day digital file into DNA strands. Bo simply thinks the reverse is possible and that if there were higher beings out there what better place to put file of great importance than human DNA which will always exist. Bo quickly recruits his friend Ken Himlauger and from then on things begin to roll as they start to try and decode the possible messages left behind in our DNA, that is unless religious extremist can get to them first and their scientific exploration.
Now the way the book is set up is simple, so a reader is easily taken from scene to scene almost as if one were reading a screen play instead of a crime novel or mystery book. In fact the author time and geographically stamps each section, so you know when and were each part you are reading is taking place in the story, in a way it felt like those CSI shows and how they do the time stamps, in order to keep the story line in chronological order. My only issue with the formatting was I never got a Date stamp, so I'm still unclear as to when the story began, when it all happened, how long it all really took place, etc. So it could have all been over a week or a month.
Overall, the book was a good read, I won't say light as the subject matter can be rather lofty, but it wasn't too difficult to follow especially when the author made sure to repeat the books main purpose numerous times. I will say the book overall was a little iffy at times in being politically correct, but hey most books when dealing with religions or extremist usually go one way or the other, so I admire Fess for hitting on extremists from a lot of religions that would have been affected by having a DNA message released. Like said this books concept is unique, the dialogue is more script than novel but the pace is steady and in the end the book makes you think. I'd recommend it to anyone looking for a clean light SciFi-ish read that includes a bit of intrigue concerning NSA, death threats and all the U.S. Government Big Brother trappings to help protect the Secret DNA code.
Posted by hey, it was free at 6:48 AM