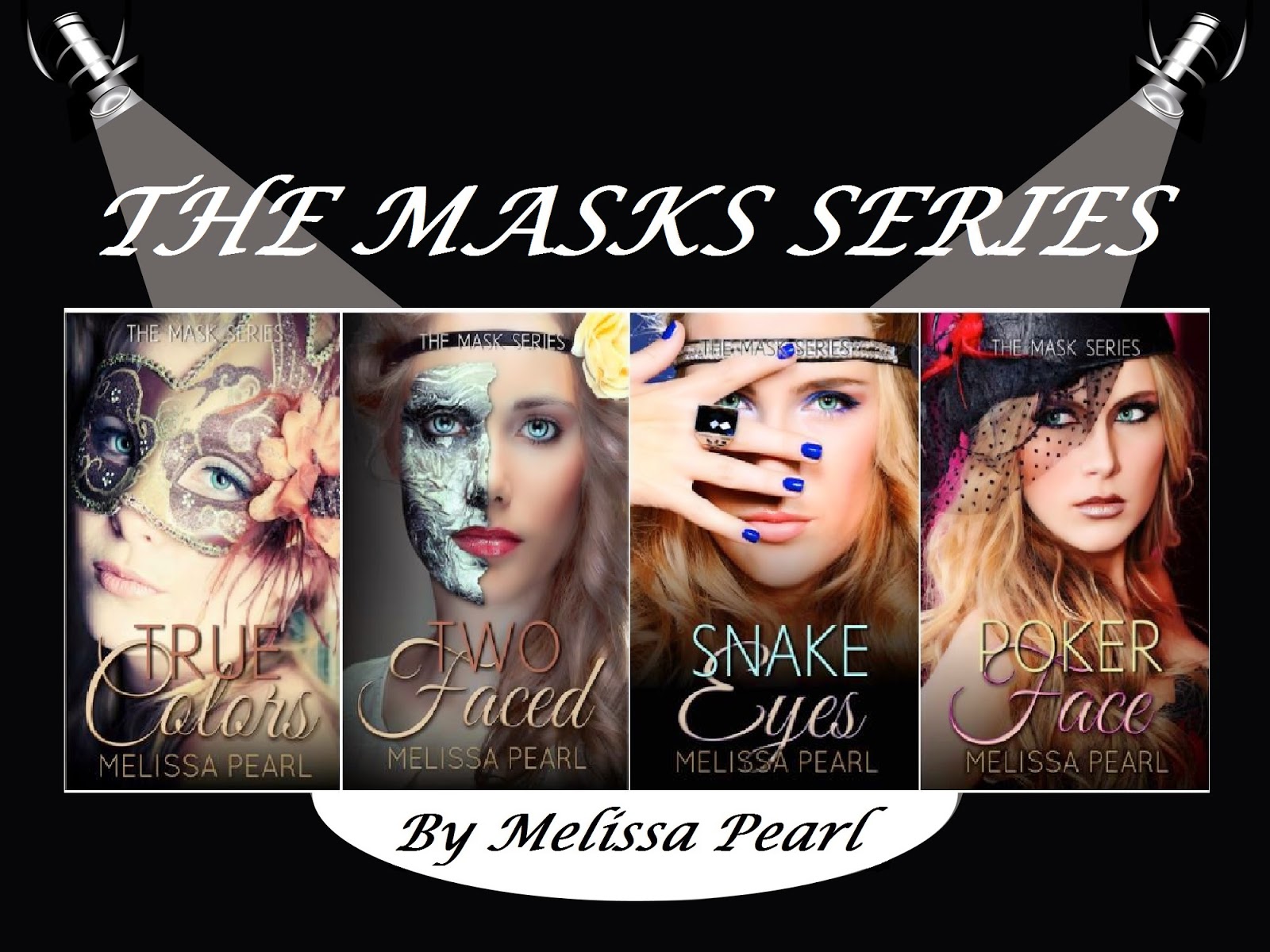 The Masks Series is a Y.A./ N.A. series written by Melissa Pearl (Amazon Author Page) that is a contemporary romance with a paranormal twist, which is so beautifully crafted and well written that a reader is instantly caught up in the books. This whole series is a complete adventure full of crazy moments one after another that will just wrap you up and take you through Caitlyn Davis' life as she ventures out into the world trying to live with a gift to see beyond people's facades. A reader can't help but feel for her plight in not only trying grow up as a young woman in trying to balancing a life, school, family, and maybe a relationship, but now she also this new gift. This gift causes Caitlyn to take on a new perspective on life where she can't help but be empathetic towards people's situations and finds herself always wanting to help them out of their situations despite what it may cost her. In the end it's the connections Caitlyn makes with some new friends, especially with her man the amazing Eric Shore, that will leave any reader jealous and wanting to read more and more. Seriously the adventures and sometimes very dangerous situations Caitlyn manages to get herself into are page turning, or should I say ebook swiping moments. But seriously, readers will get that reading tunnel vision where the world just needs to go away for a while, because I MUST finish this part now! Yeah you know what that feeling is like, well these books make you do that time and time again, because this author, Melissa Pearl, is just gifted that way, and this series proves she knows how to capture her audience. So yes, I greatly endorse this awesome series and have been a reader of it from the beginning to the bittersweet end. So if you are still not convinced, though I haven't the foggiest clue why not, listed below is my True Colors review and links to each book with their book blurps. Now be forewarned none are too revealing BUT still read at your own risk. I dare ya!

.4
Book Link: Click Here
The main character Caitlyn Davis, is first introduced as a modern girl to a fault. She chooses to let her best friends and social status at school dictate who she should be and how she should act, despite how she may feel on the inside about everything. Like many high schoolers, Caitlyn goes with the flow and does not go against what everyone else does and instead holds her tongue most of the time. However it's upon receiving her gift that Caitlyn begins to see everyone's TRUE emotions hidden by their fake smiles and laughs, which causes her to change her lifestyle for the better.
The concept that a person can see behind the masks we put up to hid our true feelings is so brilliant and real. I mean the book is paranormal, but not to out there in the sense that Caitlyn isn't reading minds, flying, controlling time or the elements. Instead Caitlyn is given the power to read the real person behind who they try to present to the world, and its from there Caitlyn must decided what to do with that information. With some help Caitlyn learns to harness her gift and use it to understand the people she reads, in order to help those in need.
Caitlyn's biggest supporter and helper through her discovery of her gift is Eric, who was once her next neighbor, but then becomes her boyfriend, her Hercules, her Silver Lining. Their relationship is something she can count on as pure and true, when all Caitlyn encounters are false realities and emotions from people she thought she knew. Eric is perfect for her and Caitlyn discovers this especially after her disaster of a boyfriend Chase in the beginning of the story. I must mention there is talks about sex and partial sexual situations that would makes this is a YA and a bit of a NA book too in my opinion, since Caitlyn is a senior in H.S.
Then there is the violence that occurs in the book. It's strange because while reading the book I was is enraptured I didn't really comprehend the reality of maybe how much abuse could have been happening to some of the characters. However, in thinking back on it, those situations would be very sickening in reality. I think Melissa Pearl just does an amazing job in writing about the violence in a away were it's just enough to make it vivid and descriptive but not disturbing. I don't know if that makes sense, but if you've read her work before you know what I mean, if you haven't take my word on the fact that she keeps your attention with a scene with out making you cringe despite the scene probably being ten times worse than how she's portraying it, she's just great and not disgusting us.
Overall, I would definitely recommend this series. In fact I've already talked it up to a couple friends and have shared it with my sister. Of course the title "True Colors" always reminds me of the Cindy Lauper song, but don't let that stop you from reading this book if that too pops into your head every time you say the book title. This book is thrilling, sweet, and filled with deep contemporary teen and YA issues. I can't wait to see what happens next for this modern day heroine and how Caitlyn can develop relationships with the gift of insight past the facades of people.

.4
Book Link:Click Here
Caitlyn Davies has an unusual gift. She knows exactly what people feel. She sees their true reactions, every time. Everyone wears a mask, but she can see the truth hiding behind it. This ability has changed her life, both for the better and the worse. She can choose to ignore what she sees...but what happens when it involves the guy she loves?
Eric Shore knew getting involved with a girl who could read people was risky, but he couldn't help himself. Caitlyn is gorgeous and he loves being with her. Things have been going great...until she tells Eric that his step-brother and star basketball player, Connor, is doing drugs. Having looked up to the guy for years, Eric just can't buy it. Things only get worse when Caitlyn starts to question the true nature of Eric's favorite teacher at UCLA.
Their first year at college together was supposed to be amazing, but their relationship is off to a rocky start, especially when Caitlyn refuses to deny what she's seen in order to keep her boyfriend happy. As more and more masks are peeled away, Caitlyn is thrown into a dangerous world where secrets are exposed and Eric once again has to decide whether dating Caitlyn is worth the risk. It doesn't take long for the young couple to realize that even those closest to you can be two-faced.

.4
Book Link:Click Here
Caitlyn Davis expects her sophomore year at UCLA to be perfect...until she walks into her dorm room to find Special Agent Zoey Kaplan of the FBI waiting for her. In that instant, she knows her idyllic year with new best friends, Nicole and Dale, along with her super hot boyfriend, Eric, is about to fall apart.
Having been forced to work with the FBI months earlier, Caity accidentally gave away her special ability to read people's emotions and know whether they were telling the truth. Now, Kaplan wants Caity to go undercover again for a secret operation that will bring her close to the sadistic Diego Mendez, a man believed to be involved in human trafficking.
Eric Shore is not a man who trusts easily. Having been burned multiple times, it's hard for him to open up completely, but his love for Caity makes him want to try. Yet, her sudden withdrawal worries him, particularly when she chooses to spend time with her new roommate, Quella Mendez, over him. When Caity's behavior begins to match that of her wild roommate, Eric wonders if their relationship is as strong as he believed.
As Caity struggles to maintain her relationship and do her job, she finds herself pulled further into a dangerous world that could take away everything she holds dear. Will Eric learn the truth in time to save her? Or will the man with the eyes of a snake destroy their perfect romance?

"Poker Face" (Book 4)-
Price: $2.99 ebook (at time of post)
Listed Rating:***NEW RELEASE***
Book Link: Click Here
When Caitlyn Davis agreed to work with the FBI, she never imagined it would lead to her own kidnapping. But her special ability to read people's emotions and decipher the truth has attracted the unwanted attention of Santiago Gomez, a rich casino owner who intends to use Caity's talent to further his own business.
Eric Shore knew Caity didn't want to break up with him; her scribbled note left on his bed gave him a snippet of the truth she'd been hiding. Still reeling from his brush with death and the loss of his beloved grandfather, Eric throws himself into searching for his girl.
With help from his reemerged father and a rogue FBI agent, Eric follows a tenuous lead to Las Vegas, not caring that his rescue attempt could bring him face-to-face with the same man who killed his grandfather and wants him dead as well. While Caity fights to survive the horrors of her slavery, Eric is thrust into a dangerous world that could cost him his life, along with Caity's.
Posted by hey, it was free at 1:50 PM