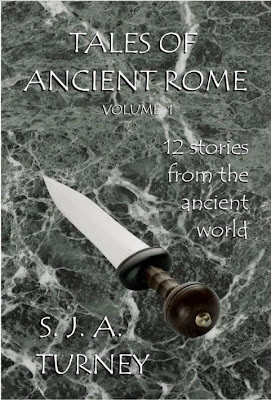 This a compilations of various short stories from individuals in different countries, cities, and diverse social standings. Beginning from the far reaches of wars and forts in Britannia to the Persian empire and deserts where politics involve the Palmyrene Empire from ancient Syria. Each story reveals pieces of ancient life during the Roman Empire.
Stories I found lacking were "Lucilla" and "Aftermath in the Ludus" both ended on strange notes that left me wanting further explanation. Especially Lucilla, that story was leading somewhere but then I missed where. And the Ludas one ended funny but perhaps that was the point. While stories such as "Trackside Seats" and "Exploratores" were my favorites. They were more detailed and could have been written further into a novel. Trackside is about a chariot race and I've always loved that kind of a scene since I watched the movie Ben Hur as kid. Exploratores is adrenaline and fighting, basically just a taste of what a soldier in the legions would do in a scouting party.
Overall, I really enjoyed each of the fictional stories. The author wrote some stories shorter than others and for some stories it was fine for a taste but some left me wanting. Historical fiction such as this is a good example of this genre. The stories weren't  overly fictitious but highlights of historical moments, building the fictional story from there. Example is the tale from the "Reading", which entailed a character crossing paths with the Pontius Pilatus, the Roman ruler who would put Jesus Christ to death. Though the author didn't keep to any time line or purposely placed all his stories in connection to any main historic event, a reader can get a good sense of life in the Roman world from these short tales. So if you are into Rome and love to learn or read about the people from that time period, these short tales are a good way to pass the time and perhaps spur you to learn more about Rome.
Posted by hey, it was free at 1:00 AM