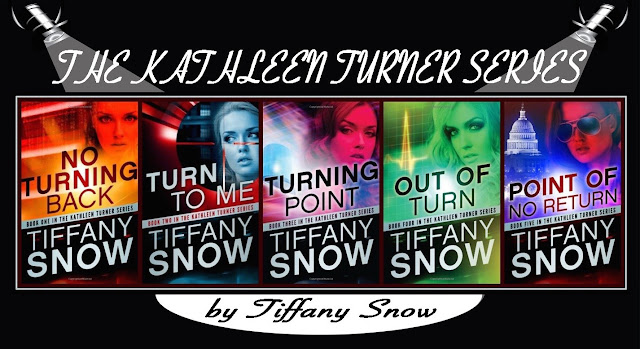 "I love to stick with characters over a series of books when I read, which is the same way I write. My first series - THE KATHLEEN TURNER SERIES - includes five books, two companion novels, and features a love triangle."
-Tiffany Snow
Author links: Website, Facebook, Twitter, Amazon
Penned Series: Kathleen Turner Series, Tangled Ivy Series, Blank Slate,
and Risky Business (not yet released)

This is by far one of my all time favorite series! I must have stayed up sooo may nights re-reading these books and anticipating each new release. I found the first book in the series by accident having downloaded it as a freebie. The old cover for No Turning back caught my eye and the book blurb intrigued me. So I decided to read it and was immediately enraptured in a world of espionage and drama over the course of 5 novels and 2 companion books. Tiffany Snow had me hooked from book one and I still love to re-read these books every so often, because the characters and their drama is just that memorable.
The books revolve around Kathleen Turner and her life, specifically her life and how it collides with two men, Kade and Blane, brothers who couldn't be more different. Kathleen is shown to be sweet but up for a challenge. She knows that life is rough but is strong enough to endure it and willing to work hard to build a life for herself. It's not just her beautiful exterior but her heart and attitude that attracts Kade and Blane to her.
Blane is the older brother, a lawyer, and gunning for a political future. He has his life planned out for himself and when Kathleen literally falls into his lap, his world is never the same. Kade is the younger of the two, born from an affair and meant to be forgotten. He becomes a gun for hire realizing the law protects the guilty more than the victims. So when Blane asks for back up in a situation he doesn't hesitate, but then he meets Kathleen. She makes him think he could be the hero of the story instead of the villain hes made himself out to be for so long.
Now to be honest the only book I was "disappointed" with was the last book, Point of No Return. Not because Kathleen didn't choose the brother I was rooting for, no my issue was the direction the book went. Kathleen as a character grows from being a girl not knowing much and having to learn on the fly to actively learning to defend herself and trying to be on the same level as Kade and Blane. Sadly in the last book, she fell flat as strong female character becoming too emotional. Then there was just too many sex scenes, the book lacked balance between plot and romance like the previous books. Instead it was more "action" than action and I had really looked forward to a few more fight scenes.
Overall, This series has you reading page after page wanting to know what's going to happen next. Each book has it's own plot but there is a huge plot that spans all 5 books that you follow and want to know how it will all end. Oh and the biggest question of it all: Who will win Kathleen's heart? And just so you y'all know she does in fact pick. No copout whimpy wishy wash random fake out choice. Seriously though don't let my assessment of the last book deter you from this great series. Kathleen is awesome as a female character who despite being a lone female she ends up with a great group of friends who become her family in the end. Most of the readers/fans of the series were all about Team Blane and Team Kade, but I was all about Team Kathleen. She's the character you'll find yourself rooting for, reading page after page wanting to find out how she'll survive the next situation. So if you want to enjoy a story about a woman learning to become strong, surviving dangerous situations, finding love and ultimately getting her ending, then invest in this series.