"Y.A. Tuesday": The Shadow and the Rose (The Ash Grove Chronicles Book 1) by Amanda Deweese 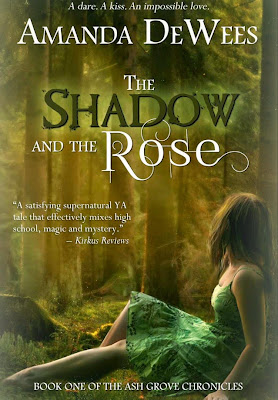 My Thoughts: Story Seemed To Be Heading Somewhere BUT Then The Main Characters Just Didn't Sell Me On The Series.

Note this review will most likely be filled with **SPOILERS** so be forewarned. Normally I hate to spoil anything, but there are some big issues I want to address before a reader spends their time on the book. First this book is posted as Young Adult and to be fair it is in a way, since the characters are all still in high school and are under the age of 18. However, some of the situations they find themselves in are a bit mature for a younger YA audience, so I'd say this is an upper YA book due to content.
The story is told from the main character, Joy Sumner's perspective. Joy is trying to find her artistic niche in the hidden oasis of the Blue Ridge Mountains own Ash Grove High School for the Performing Arts. She feels like the plain Jane in the school where all her friends and peers prepare for stardom. It's upon a dare from the BBBs (Ballet Bitch Brigades) that Joyce finds herself at midnight in the graveyard  to retrieve a white rose from the school's founder's grave. What should have been a quick in and out task turns into more when she meets a beautiful stranger in the dark night named Tanner. Later on Joy finds that the hot stranger isn't actually a stranger at all but is an old classmate named Tanner Lindsey, who is now a rising supermodel and the current favorite protege of the superpower actress and model Melisande. Tanner and Joy begin a friendship that turns into a secret relationship, as Tanner reveals his mentor and sometimes lover Melisande is overly possessive and too dangerous to upset in any way. Through the stories Tanner has told of Melisande and the things researched on her own, Joy finds out Melisande may not be entirely human. And on top of all that Joy finds that her special school is actually a hot spot of supernatural energy that could explain a few mysteries.

******WARNING SPOILER VENTING AHEAD*********
Soo one of my biggest disappointment was the fact that Joy just went out and did the dirty with Tanner in the dirt. I mean really? Joy was shaping up to be his savior from Melisande by discovering things like why she remained ageless. But then Joy goes and professes her love for Tanner when he's still obviously stuck on, and to, Melisande, he never even said I Love You back, but he sure did say it about Melisande, big hint right there. Then there's the fact that the author didn't even note the couple using protection at the time they made love in the secret garden, which made me instantly think "well, she's gonna get pregnant." And shocker Joy does. That's probably my biggest issue, Joy's pregnancy. She seriously tries to hide it as being fat and gets by mostly on her own, while still hoping to free Tanner so they can live HEA. The HEA part I don't mind as I wanted Joy to have one, but there in the end Joy seems to write everything off as if life is going to be all easy breezy from there on out now that they are together. Oh heck nooo! There isn't a teen mom alive that will say life is heaven once you have a kid at 17, no matter how precious the child is, being a parent is work. Let alone the fact both, Joy and Tanner will need to work on their relationship as a couple, because Tanner will obviously have emotional issues form his time with Melisande. Who btw was a gross cougar/molester (like any old mythological fictional creature) and I'm not even going to touch that issue, since it was covered in the story but big Ewww!
*******************************************************************************************

Overall, book was okay for a time filler. I found the author's writing style to be fluid at points, but then rushed at others making me double back to read parts twice to ensure I read the section right. The author did an okay job of mixing modern high school drama with magical mayhem. I had hoped for a more realistic ending to the main characters relationship, but I suppose the book needed the extra drama to continue the series. The school drama was great, and on it's own would be an interesting Y.A. book. The magical side of the story was intriguing, but fell flat when it blew up to be more than just about the school the secrets it held and became more about Melisande, and subsequently about freeing Tanner from her evil clutches. However, Tanner as a lead male character was extremely weak and never made me feel enough to pull for Joy to really want him back time and time again . . . again. Yes, I wanted Joy happy because her life needed some great happiness after all the bad cards she'd been dealt, but really I wanted her best friend William to start liking her, or heck even her gay guy friends would make for a better companion. By the end of the book I was okay with the story being over and I feel fine with not going further in the series. The school's magic mystery was too under exposed for me to be fully intrigued to read further in the series, as it seems they are all safe. So if you want to read about high school drama that includes relationships, dating problems, popularity, sexual curiosity, and a sense of family all while trying to hopefully out preform everyone on stage, but there's possibly something evil wanting to take your life and soul, then this book might be okay for you to try but I'm happy I got it for free.
Posted by hey, it was free at 4:00 AM