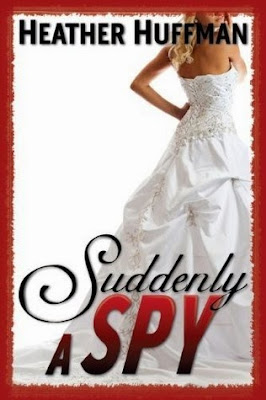 My Thoughts: Suddenly This Book Became Extremely Worth My Time

Looking for a clean suspenseful very fast paced spy romance with lots of action plus a call to attention in human trafficking? The grab this book. It's focused around a female heroine who goes from working a desk job to an active spy out of necessity to stay alive and to see if the man she married is worth the risk.
The day that should have been Veronica Sinclair's happiest became one of her worst. On her wedding day, an alluring mystery woman crashes her reception, suggesting Veronica’s new husband, Richard, isn’t who he claims to be. After confronting Richard about the accusation, Veronica finds that she must go on the run with the man she thought she knew, or his secret past may be the death of them. Now her life is full of questions number one being who is her husband really? Then there's other big questions like who is after them? Can she become strong enough to take apart an evil organization and the man behind it? And then other huge question of who can Veronica and Richard trust, including questioning their trust in each other?
As a side note I must mention and give HUGE props to this author for writing about the issue of human trafficking. Not many authors do and it's a shame. I can recall less than 5 authors who have done a service in bringing attention to the growing issue, and commend this author for involving her characters in this terrible social justice issue.
Overall, I grew to really like this book. At first I was a bit put off by how Veronica so easily seemed to flow into the whole spy world, but as I read on I got absorbed into her character and loved how strong she grew. Veronica is a tenacious female heroine who when faced with a crappy situations decides she won't have it and plunges into the mayhem head first. There were only a few issues I had with the story that caused a 4 star mark instead of 5. Richard as a character didn't connect well enough for me and the author continued to slip in every once and a while that he had an accent, it threw off the moments for me and just wasn't needed. Also the secondary characters could have been flushed out a bit more, but I don't believe the author plans to make this a series, so that may be why they lack more character depth. In the end Veronica and Richard are a couple that have a lot against them and it's an fast paced read to see how they'll get free and take down the bad guys. All the while Veronica learns how to become a super spy, readers see her biggest challenge will be to keep her head and heart on the same page by not allowing personal feelings to interfere when she's operating in the world of crime bosses, seduction, human trafficking, and espionage or it just all might lead to the end of all she loves.
Posted by hey, it was free at 2:00 AM