Hey, It's A Book Tour for "In All My Wishes" by Ciara Knight

Book 1, in the Riverbend Novels
"In All My Wishes"
Genre: Contemporary Romance. 188 pages.
Price: $3.99 ebook (at time of post)
Book Link: Click Here 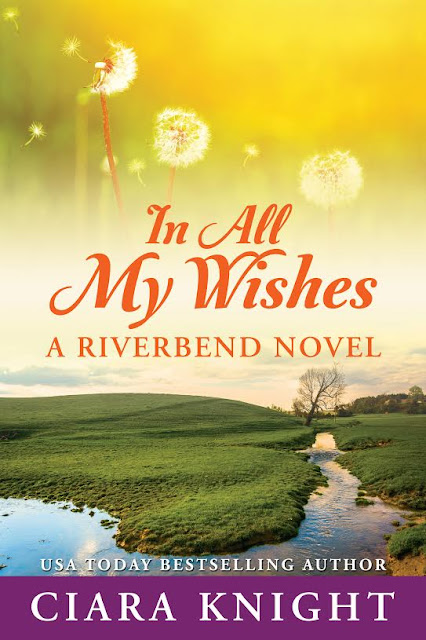 - SYNOPSIS -
At the age of fifteen, Anna Baker was ripped from her childhood home, and her one true love, vowing to return the minute she graduated high school.

Professor Liam Harrow once believed his childhood sweetheart would return home to him, but during college he faced reality and hardened his heart to love.

My Thoughts: In All My Wishes, Years and Dreams, Life and Future.
The book felt like "Sweet Home Alabama" meets "The Notebook", the story had elements of past books I've read, but felt new and just what I was looking for around Valentine's weekend. The story had the romance of "will they won't they?", but with an added element of mystery in the background. I enjoyed the easy flow of the novel and the romance between the main characters was sweet, I'd actually love more of them.
Busy with running her high fashion empire that caters to sheiks and princesses, Anna Baker, returns home to Riverbend to be the maid of honor for her best friend, Cynthia. However, once home Anna is confronted with her past in the form of her old sweetheart the ever charming, Liam Harrow. Liam now a rising professor at the local university has one mission, show Anna that she is his love and has been his only love since they met. Ever since Anna abruptly left with her mother, when they were still in high school, Liam has been hoping to have her back in his life. Both Anna and Liam had dreams and promised one another many things when they were young, but after Anna left their lives changed. No matter what Liam tells Anna, she can't let herself return to the place she's always considered home until she discovers what happened in the past that pulled them apart.
Overall, nice easy read. The story is a nice romance that isn't overly complicated and frustrating with the floundering will they won't they reader questioning. Yes, there was a time or two I wanted to yell at Anna to cut Liam a break, but knowing something or someone may have kept them apart helped assuage my reader angst. The subplot, who kept the couple apart, needed more development but then again it was just a catalyst to the romance, so a reader may not mind it not being properly concluded, especially since we are given such a sweet epilogue ending. So if you are looking for a story about a girl separated from her love only to return home an independent woman afraid to trust and love, while the man she once loved does everything he can show her he is worth making a home with, than this novel would be good to read.
******************************************************

EXCERPT
He hugged her to him, holding her arms at her side so she couldn’t hit him. “It’s not too late. You’re not that old, you know.”

She squirmed, but he held tight. “And you’re getting too old to be the playboy of Riverbend. I think it’s time for you to retire that title to a new graduate.”

A shooting star bolted across the sky. “Quick! Make a wish.”

Anna slid an arm free and held his cheek, facing him. “I don’t have to.”

He dared to move closer, to hope she’d return his affection. His heart pounded with adrenaline and his breath quickened. No woman ever turned him around or flipped him upside down like she did. “Anna.”

“Shh.” She gently pressed her lips to the corner of his mouth. A shiver of excitement vibrated from the top of his head to his toes. He held onto her for dear life, hoping she’d never pull away, never leave him again.

A long silence rent the air with indecision. He released her and she slid away, only a few inches, but there might as well have been a valley of broken dreams and wishes between them. 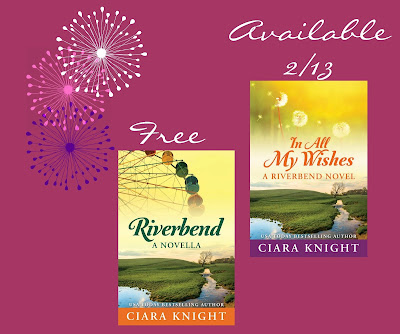 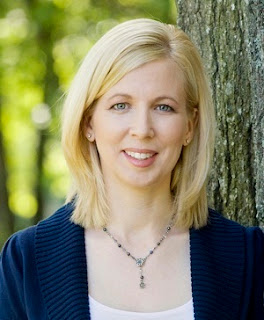 Ciara Knight writes with a ‘Little Edge and a Lot of Heart’ with her contemporary and paranormal romance books. Her most recent #1 Amazon bestselling series, Sweetwater County, has topped the charts and received acclaimed reviews. Her international best- seller, Pendulum scored 4 stars from RT Book Reviews, accolades from InD’Tale Magazine and Night Owl Top Pick. Her young adult paranormal series, Battle for Souls, received 5 stars from Paranormal Romance Guild and Night Owl’s Top Pick, among other praises.
Posted by hey, it was free at 1:00 AM