No "Friday Favs" today, but an Honest Review for "Gabe" by Evan Grace

. 3
Price I Paid:  Zip,**I received a free copy in return for an honest review**
My Rating: 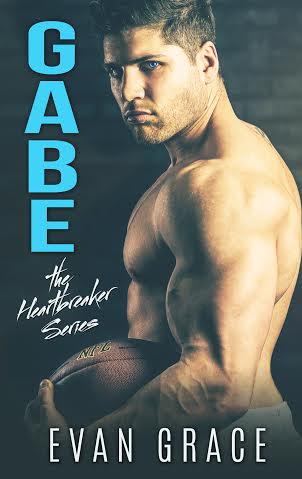 My Thoughts:  The Storyline Had Potential But The Sex Crowded Over Everything.

Honestly if I hadn't given my word when I signed up to read and review this book for the blog tour I'd have stop after the first chapter. The main character was enjoyable to a point but her eagerness to please an overly dominant man who admits to using sex as a way of control, distraction and tempering her, which ruins my last bit of appreciation for her as a female lead. The plot itself felt too forced and the final chapters, especially the epilogue ending seemed a different book, more like the story I'd hoped to have signed up for initially.
Graduating as the valedictorian of her college class, 22 year old Jasmine Nichols, has always kept her life in order. Jasmine has grownup knowing she has only herself to rely on since her grandparents died when she and her twin brother Jordan were 17 yrs old. Her grandparents raised them when her mom became ill shortly after having them and their sperm donor "dad" walked out on them. So when Jill, Jasmine's best friend, offers her a job after graduation she tells her to take a couple weeks off and have fun, Jasmine doesn't know what to do with her free time. Taken to a club called Debauchery by her brother, Jasmine has a hot encounter with a man who awakes her every desire, which scares her to no end. That man is Gabe, Gabriel Johnson, and it's not until the next day at a family barbeque that Jill brings Jasmine to that she finds out the man she met at the club is Jill's half brother Gabe. Shocked to find the woman he can't stop thinking about, Gabe won't let her run away this time as he intends to make her his and show her they have something between them. Gabe has never felt this connection before and will fight to keep it, because he quickly realizes Jasmine is not like any other woman he has ever known before.
Overall, completely disappointed with the story and characters. Jasmine was kinda funny and seemed to be on my level being around my age, but when she literally decided to change careers, forgive without a real change and let a man take over life, I was like "Oh Heeeck Nooo!" The fact Gabe was 38 and Jasmine was 22, was a bit off putting especially since Gabe seemed to be 20 years old by how much he talked about his d*ck, the guy is a man so act like it and not a guy from a fraternity. Here's an example of how irrational or immature Gabe thinks for being a savvy real estate guy, so basically Gabe hates any man staring at Jasmine like she's hot, so when she tells him that it happens and you can't knock out every guy with eyes, he purposefully makes her jealous by having girls, yes plural, flirt with him to prove jealousy stings, yeah that'll teach her. My other huge issue was the sex in this book was excessive, I understand they were hot for each other, but to do it even in the bathroom while out with friends or while Gabe's parents were in the house or nearby is just too much and downright gross. Now the middle of the book started to flow and progress well with character interactions and conversations, but then it all went down hill after a couple dramatic moments. The moments were forced and you could tell they were almost fabricated just to make Jasmines life hell so she could say the words Gabe wanted, which is that she needed him. In the end perhaps I couldn't understand the book because I have a certain hope and expectations of relationships in which the man basically forcing himself in your life is not okay, even if he is gorgeous. So if you are up for a book that has a dominant man who seems to love to have sex all the time whom everyone describes as intense while his woman basically has the midlife crisis he should be having at his age then all of a sudden its all good and a great HEA, then by all means this is for you but it wasn't for me, I wanted the romance story and got too much sex and not enough worth while plot to say this book is good.
Posted by hey, it was free at 1:30 PM