"Romance Thursday": Mine 'Til Monday by Ruby Laska 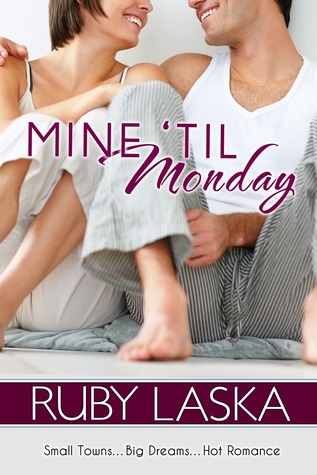 My Thoughts:  When Playing House Leads To More

Nice quick read with characters that heat up rather quickly for being so against each other. Pretending to be something you aren't always backfires and this book does in a good kind of way since the characters realizes their relationship could be real. There was no real huge plot twists that left me wanting to read this book in one sitting, so this is definitely a light read by the pool or fill the time kind of read.
Wanting to nab a promotion to prove herself to her highly educated and award driven family, Dorothy Albright finds herself lying to her boss about being engaged to a golf pro in order to get an edge in her sports wear company. Dorothy can only think of one choice to play her fake fiancé,  Mud Taylor, who is an ex-pro golfer, but is also her old childhood friend and teenage nemesis. The problem with their arrangement is old feeling keep surfacing and tensions rise.

Overall, I the book was okay. The characters were easy to follow and understand their flustered and blossoming emotions throughout the story. However, the story was just simple, nothing too taxing which made it easy to read. Dorothy "Dot" was definitely more resistant in feeling their sexual tension, but Mud was just as ready to jump ship and yet willing to admit he obviously was really attracted to his old friend. Guess their cute relationship thing was the whole "well I knew you when . . . " not many people grow up with someone who they eventually fall in love with, so this story played to that romantic dream. So if you want to read about a girl not willing to be wooed so easily by a man who crushed her teenage heart and yet there is unbelievable sexual tension between them that both can't deny, then this book could be good to try.
Posted by hey, it was free at 10:15 PM