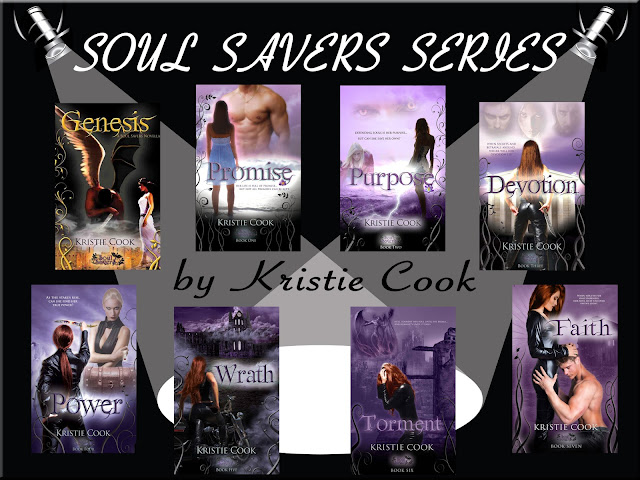 By far this is one of my favorite series to re-read time and again. The characters are all so brilliant, strong, gorgeous and unique. I had put off reading the first book for a while, but once I read the book on a random whim, like I do with many of the free books in my ebook library,  I was immediately hooked! In fact, I was so into the book and series that I snatched up the next 3 books in the series, because by the time I read the first book, 3 more in the series were out. Well there went my schoolwork for that week! Cause I read book after book and finished them up in 4 days time. After that I became a huge fan and waited patiently, and at other times impatiently, for the release of each new book in the series. It's hard not to get caught up in the world and characters Kristie Cook crafts spanning over seven books, a novella and a compilation of short stories.

In short the series is basically Good vs. Evil, Angels and Demons, but with a contemporary paranormal twist. Fighting for dominance over humans soul using their own forces called the Amadis and Daemoni, the world is in constant battle for peace. At the center of it all is Alexis Ames who begins the series at age 19, but she quickly grows into a strong woman making huge decisions that affect the world and those she loves. Following Alexis and her husband, the swoon worthy Tristan Knight, along with her crew as they all strive to survive and save the world against all odds is an emotional journey you'll want get into. 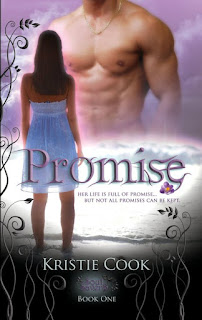 Alexis Ames has a life full of promise...but not all promises can be kept.

When Alexis Ames is attacked by creatures that can't be real, she decides it's time she learns who she really is, with or without the help of her mother, who guards their family's secrets closely.

After meeting the inhumanly attractive, multi-talented Tristan Knight, however, Alexis retreats behind her façade of normalcy...until she discovers he's not exactly normal either. Then their secrets begin to unravel. Their union brings hope and promise to her family's secret society, the Angels' army, and to the future of mankind. But it also incites a dangerous pursuit by the enemy - Demons' minions and Tristan's creators. 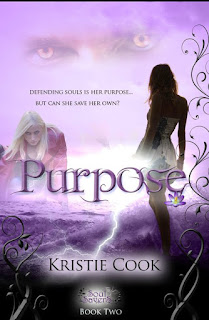 Description:
Defending souls is her purpose...but can she save her own?

Lost in despair, Alexis teeters on the edge of an abyss, her lifeline of hope fraying into a thin thread. If it snaps, she'll plunge into complete darkness. With the help of her son and her writing, she's been able to hold on. Until now. Erratic impulses, disturbing delusions and her own demonic blood threaten her sanity. When she's forced to choose between hanging onto hope or letting go to serve her Amadis purposes, she faces a decision with inconceivable sacrifices. 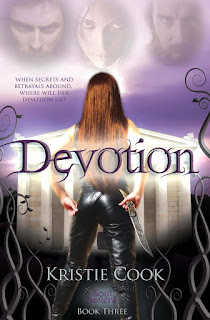 Description:
When secrets and betrayals abound, where will her devotion lie?

With powerful abilities gained from the Ang'dora and Tristan back by her side, Alexis thinks she's ready for the next challenge-- protecting her son from what appears to be the inevitable. But she has so much to learn about her powers, her new world and the people in it. Nothing is what it seems to be on the surface, including the Amadis.

Power-hungry politicians comprise the council and make impossible demands. A traitor lurks among them all, inciting trouble that could destroy the Amadis and, ultimately, humanity. The Daemoni wreak havoc in the human world, with the ultimatum that they'll continue attacking innocents until Alexis and Tristan are expelled from the Amadis' protection. The couple's own society begins to shut them out. But that's not all.

Someone's keeping a secret. A big one. Faith and hope in Alexis and Tristan will be restored if she can uncover the truth in time. 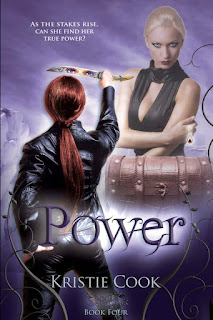 Description:
As the stakes rise, can she find her true power?

As the Amadis prepare for war, Alexis returns to Florida with orders to relax, regenerate and replenish her depleted power. But her task list quickly grows—establish a new safe house, learn the art of conversion, find her AWOL protector, help a desperate fan, and protect her son. Oh, and figure out what’s going on with her husband, whose peculiar behavior just might get them killed. 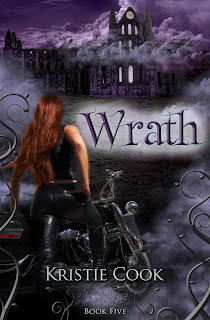 Description:
Will a mother’s wrath make her cross the line?

I didn’t want to cry. For once in my life, tears evaded me. Perhaps because I refused to grieve this loss, because it wasn’t a loss in my eyes, in my heart. It was a call for war, yes. But not a loss. I wouldn’t allow it.

Besides, I was too mad to cry, even in my exhaustion, and anger would get me much further.

As I curled my body around Sasha’s, though, I realized the anger within me had changed. I no longer felt irrational and blinding fury that dulled all other emotions. But that was okay. I really didn’t want to be Psycho Alexis. This, what I now felt in every cell of my body down to the core, was better. My anger had condensed and solidified into a cold, hard stone settling within me. Something I could control and hold onto for the long term to keep me going and focused on the goal. 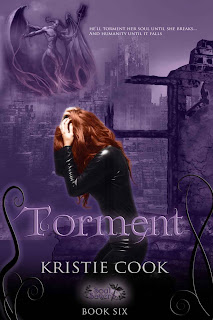 Description:
He’ll torment her soul until she breaks…and humanity until it falls.

When the Daemoni expose their existence to the human race, all Hell breaks loose. Literally. Not only do they walk the world freely, attacking at will, but they’ve infiltrated the highest levels of power in the human world. World War III erupts between countries and species, with Lucas, leader of evil on Earth, orchestrating it all. He even possesses direct control of thousands of human soldiers’ minds, putting himself in position to take over humanity.

Alexis, still young and inexperienced, must lead the Angels’ army to war. But every step she takes is trumped by Lucas, who single-handedly turns the humans against her Amadis. When Alexis and Tristan top every country’s list of Most Wanted Terrorists, they are forced to go underground to fight this war. And their first mission is to free the human soldiers by breaking the link that allows Lucas to control them. 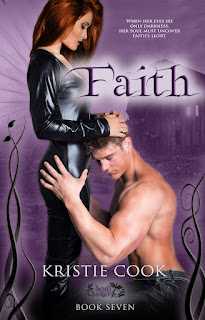 Description:
When her eyes see only darkness, her soul must uncover faith’s light.

Evil reigns the world. Earth’s been ravaged. Only supernaturals roam the surface, while anyone else who escaped the fallout remains hidden deeply underground. The only signs humans survived at all come from those who serve the Daemoni. To finalize his conquest of humanity, Lucas prepares to rip down the veil between Earth and the Otherworld, opening the gates of Hell into the physical realm.

So why do the Angels insist on Alexis fighting a war that’s already been lost? Defending a world that no longer exists?

With a soul that’s been battered and beaten by both Heaven and Hell, Alexis holds onto a single conviction—her love for her family. Her only mission now is to save her husband’s and her son’s souls. Once she does, she’ll plead with the Angels to allow them off this world God has obviously forsaken. 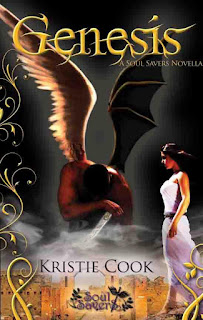 Description:
Discover how the Amadis began in this fascinating prequel to the award-winning Soul Savers Series!

While the land of Ancient Greece is plagued with mortals' wars, twins Cassandra and Jordan have lived more than a lifetime as outcasts. When their dying father divulges a secret that's been buried in his soul, his children come to opposite conclusions, launching them down two very different paths.

Jordan descends down a road of darkness and discovers the Daemoni, servants to Satan. His passion to gain their inhuman abilities, especially that of immortality, nearly consumes him, but when he thinks he's achieved his ultimate goal, he yearns for his sister to share in his power. 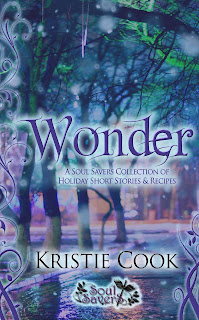 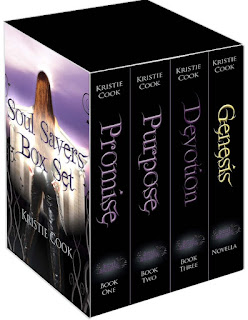 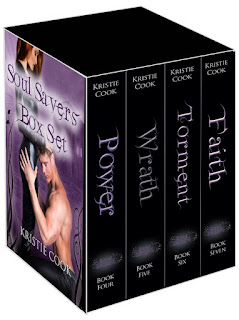 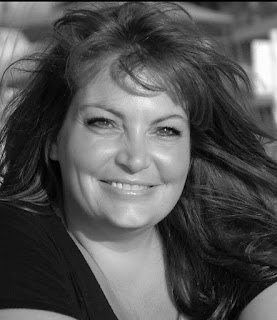 Kristie Cook is a lifelong, award-winning writer in various genres, from marketing communications to fantasy fiction. Over 200,000 Soul Savers books have been sold, with Promise peaking at #54 on the Amazon Top 100 Paid list and at #1 in the Amazon Fantasy category. The Space Between kicks off her second New Adult paranormal series, The Book of Phoenix.

Besides writing, Kristie enjoys reading, cooking, traveling and riding on the back of a motorcycle. She has lived in ten states, but currently calls Southwest Florida home with her husband, three teenage sons, a beagle and a puggle.
Posted by hey, it was free at 4:00 AM