Hey, It's A Book Tour for "The Touched" by Jenniferc Weiser

★★THE TOUCHED by Jenniferc Weiser★★ 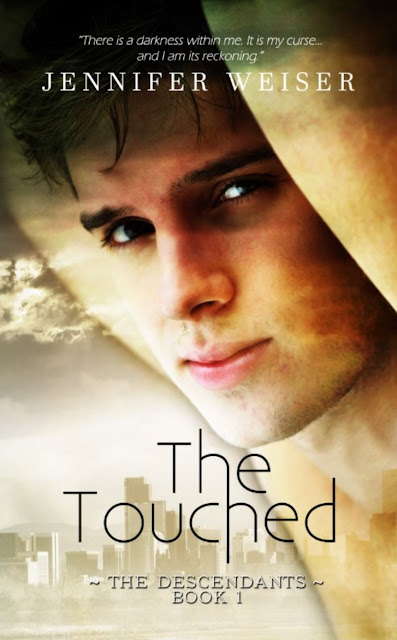 In a world where deception is the key to survival, Ara has kept up the charade of being a perfect Legion Leader’s daughter. But a darkness stirs, and she discovers she is Touched, a mortal gifted by the Gods. The Touched are as rare as they are feared, and Ara is forced to leave Union City for neighboring Midnight City to protect herself and those she loves, leaving Tove Thorn, the boy who has always known her heart, behind.

Carter Decker has vowed to burn Union City to the ground…

Midnight City’s cocky, infamous bad boy always gets what he wants, and he wants Union City to pay for burning his mother alive because she was Touched. When Carter meets Ara, she is everything he’s been taught to hate. Then he learns she is Touched—just like him—he isn’t sure who he hates more…the Touched girl whose father killed his mother, or himself for being tempted by someone he’s sworn to kill.

They are told they’re fated to be soul mates…and they each wish the other never existed.

When Midnight City is attacked by Union City, Carter and Arabella will do the unthinkable…even if it means falling for the enemy. The truth lies in Arabella’s home nation, and Tove is waiting. Soul mates or not, he has an advantage Carter doesn’t, fated souls be damned.

War is coming…and Ara is the prize.

My Thoughts: Secrets and Love Mixed With Powers and Politics
Crazy ending to a great opening book for a promising new series. The reality in this book is a fantasy world and the characters are supernaturally gifted but filled with emotions, which the author brings to life page after page.
Told from multiple character perspectives, the story centers around main heroine, Arabella 'Ara' Penthallow. Ara has lived her life trying to maintain the image of the perfect daughter for her father the Leader of Union City. However, political unrest pushes plans into motion and Ara finds herself unable to hold her family secrets any longer. Part fleeing and agreeing to a political agreement Ara finds herself in the neighboring city of Midnight. It's in Midnight City Ara allows herself to be free and admit she is one of the Touched. Admitting her abilities is one thing but the darkness within threatens to consume her and only one seems to help bring her light. He just happens to be Midnight City's bad boy and heir apparent, Carter Decker. Ara struggles with her possible feelings for the frustrating Carter, when her heart may still be in Union City with a childhood friend named Tove Thorn. Everyone has their own agenda and Ara with the help of Tove and Carter trains and weeds through the lies, politics and deceit before it's too late.
Overall, great intro book. The world which this book is set in is strange but unique, ushering in a great new series. Ara is mostly conflicted emotionally throughout the book, but really who wouldn't be with the two options she has for male candidates? Normally I'm not one for love triangles but the guys are worth the conflict. I've already chosen the guy I hope Ara chooses soooo *fingers crossed. But relationships aside, I can't wait to see how Ara develops in the next book. The ending was such a cliffhanger that I'm excited to see what happens next. So if you are into fantasy worlds where lies and plotting are happening when the characters are trying to learn their powers while understanding their feelings towards each other than this book is good to try.