Hey, It's A Book Tour for "Breaking Through" by D. Nichole King 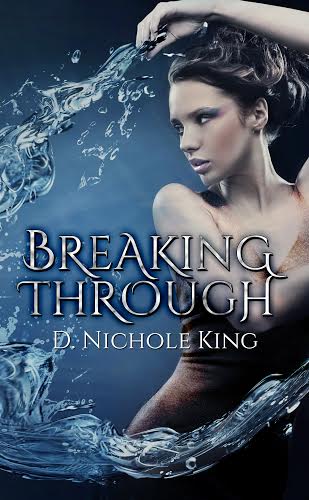 Now, the Navy wants her for a top-secret mission, but Captain Riley Barton has his reservations. He’s read her file. He knows the damage she’s capable of, and yet—

If he can harness her ability—break through her walls— 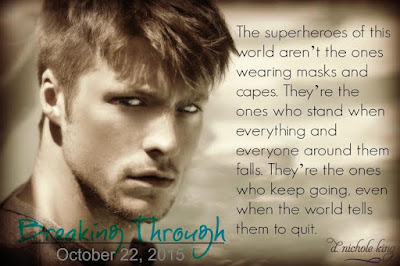 My Thoughts: Drama On The High Seas!
Story begins with a mysterious situation and ends on a emotional high. The characters are set in a contemporary world with superpowers from mind reading to levitation. The author spliced real world and fantasy like any superhero novel, but included hot romance between her main leads to make a reader turn page after page.
Emotions can be deadly when they overpower a person's supernatural ability, a fact Nautia Olson knows all to well. Being labeled unstable since the death of her twin brother Nate, Nautia hasn't been able to control her gift of water manipulation. As an aquator her skill is rare but she is a liability to those around her when she lets any emotion in the form of fear to anger to sadness take over her concentration. So when the U.S. Navy comes asking for her help on a top secret mission via the form of Captain Riley Barton, Nautia isn't sure she is up for the important job. Nautia eventually agrees to the mission thanks to her best friend Kray reminding her that this may be the one chance to find out what really happened to her brother and why she has such vivid nightmares of his death.
Overall, great book that definitely took me by surprise at the end. The mystery of it all was figuring out what was so special and "wrong" with Nautia. The poor girl is obviously special but its the why that bugs you until all is fully revealed. Nautia and Riley's relationship is cute; Basically Riley has it bad for the girl, while the girl is hung up on I don't want to hurt you with my powers problem. So you really kinda fall for Riley because he is sooo understanding and tries to be mister perfect boyfriend despite his mission and rank. Oh and their scenes were steamy, didn't expect that; Perhaps because I was stuck on the whole scifi-mystery part of the book and the romance side took me by surprise. My only issue was how the dialogue played out, the character perspectives changed chapter by chapter, however sometimes the scene would continue into the next chapter while changing into the alternative perspective, which continually broke up the moment for me. Then there is a bit of literary bread crumbs in the story that hinted at more for maybe a sequel, but if none are in the making than the end may have been to rushed in order to have that HEA conclusion. So if you want a new adult novel about a girl trying to find out why and how her brother died while honing her emotions to control her power over all things water aaannd read about her trying to make a relationship work too with a hot captain who is all about her, than this book will be worth a read. 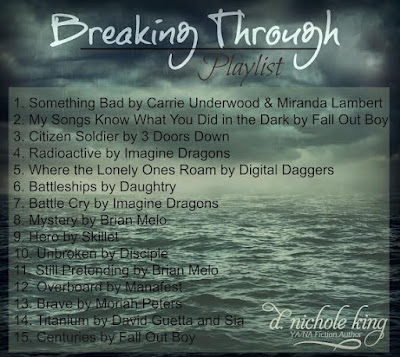 It’s pitch-black, but I think I’m inside of something. Something long and small…a capsule, maybe? Stretched out above my head, my fingers touch cold metal. Whatever I’m inside of is only as long as I am. I wouldn’t have much wiggle room, even if I could move.

I don’t know how I got here or how long I’ve been tied up. I do a quick mental scan, searching for any piece of information. Nothing. I can’t even recall my own name.

What I do know is I’m running out of oxygen. Each breath comes shorter, faster, and if I can’t control it soon, I’ll pass out before I figure out what’s going on.

I close my eyes, suck in one deep breath, and let it out through puckered lips.

What I tell myself comes from memory, though I have no clue where it came from. Whatever it is, though, it works. Somehow, my body is trained to go into hibernation mode on mental command.

Now I need to figure out how to get out of here. With my eyes still closed, I concentrate on the smell of my prison. The more I know about this box, the better my chances are of escaping. The tang of what I inhale reminds me of burnt metal and rubber. There’s another scent too, one I can’t place, even though my brain insists I know. I dig deeper, filing through blank spaces that aren’t supposed to be empty. I probably shouldn’t be spending precious energy on it, but something tells me this strange odor is important.

Bright light pours over my face, and my eyelids fly open. Above me, sunlight streams through a circular window. I don’t know how long it will last, so I quickly confirm that I am inside some sort of capsule with silver metal walls. I also confirm that I was right earlier: the tube is small, barely big enough to fit my body. The window sits exactly six inches from the tip of my nose, though I have no idea how I know that.

I see nothing above me except blue skies. I don’t hear anything outside either.

I tug at the restraints holding me in place, but they don’t give. And then I feel something, something on the outside. The capsule I’m in is moving—upward. Shit.

Calm down. Relax. Slow your heart rate, I repeat to myself.

It’s working. My body is responding—
Until I begin to free fall.

I’m not in it for long before the tube hits water. I know it’s water because of the buoyancy of the capsule. But I know because of something else too—I feel it. Surrounding me, the water gives off its own energy, almost as if it’s surrendering to me, willing me to control it. Which makes no sense.

Above me, the sunlight begins to refract as it struggles to break through the water now covering the tiny window. That’s when I realize I’m sinking. Deeper, deeper underwater.

As the light fades, the panic inside me rises. I try the calming mantra again, but nothing happens.

Drops of water fall onto my forehead. The seal around my window creaks under the pressure of the water.

I struggle against the restraints. Twisting my body. Pulling at my wrists and ankles. I yank and kick, but it’s in vain. I’m trapped.

Water sprays in from the seal, salty like the ocean, and suddenly I register where I am—in the Pacific Ocean, off the coast of South Korea. Except, I still don’t know why I’m here or how I got here.

What I do know is that this is where I’m going to die. 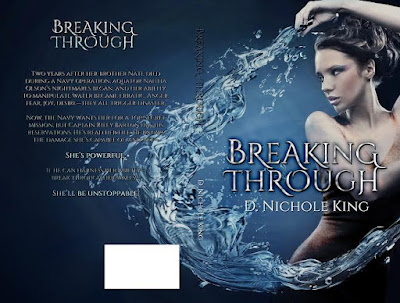 Born and raised in Iowa, d. Nichole King writes her stories close to home. There’s nothing like small-town Midwest scenery to create the perfect backdrop for an amazing tale.

She wrote her first book in junior high and loved every second of it. However, she couldn’t bring herself to share her passion with anyone. She packed it away until one day, with the encouragement of her husband, she sat down at the computer and began to type. Now, she can’t stop.

When not writing, d. is usually curled up with a book, scrapbooking, or doing yet another load of laundry.

Along with her incredible husband, she lives in small-town Iowa with her four adorable children and their dog, Peaches.

This tour is brought to you by: