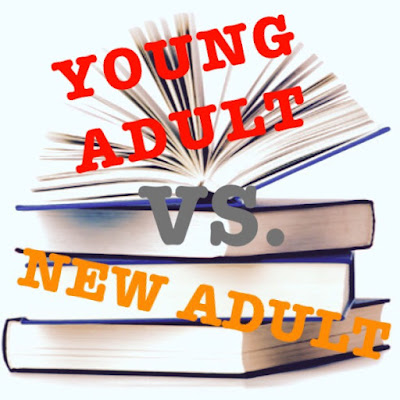 Spurred by a recent conversation with one of my best friends and several other recent conversations pertaining to the difference between Young Adult and New Adult books.  I've decided to write my descriptions of the genres and what makes them different yet similar. Why are they important too distinguish? Because there is no denying the fact that they are different, especially with who is supposed to be their intended audiences. Young Adult (Y.A.) and New Adult (N.A.) are growing genres read by a mass market of readers who range from pre-teen to adult age group. When evaluating the difference between the two genres the huge factors are simply put: content and character age.

Now I find the key differentiating factor between N.A. and Y.A. is the characters ages. Readers love to associate with the characters and the situations they find themselves in either by real life association or fantasy. So when reading a Y.A. book one should know the age is going to be at least middle school to high school age, 11-18 yrs old. On the other hand N.A. books have the main character at college age to mid twenties maybe a bit later, 18-25 (27ish) yrs old. There's two problems that occurs with character age, one is when the book is also a coming of age genre which spans over a characters lifetime. By spanning over years sometimes the character's age will lapse over from Y.A. into N.A. Which leads to the second issue, sometimes Y.A. books, and their series, will start with the characters in their late high school years but will end in college. Could be a nonissue except when deciding to allow a child or teen to read Y.A. they could be reading more adult situations than expected if the book is a more mature Y.A. book.

Another huge differential between Y.A. and N.A. is book content. Now book content means language, sexual situations, and violence. The language used in a book can really set the tone for what type of audience the author intendeds to keep. In a N.A. book the language can be more mature or explicit as the character are older in age. For Y.A. books the language will be clean and tend to be a bit educational in a sense to help facilitate learning since most in the genre are aimed to a younger audience; though the Y.A. genre is now being read by more adults than ever before. Now as for sexual situations it all depends again on who the intended audience is planned for and the degree to which the characters will grow up in the story. Y.A. books will generally be mild in sexual situations and will not be overtly descriptive for the most part. However N.A. will have sexual situations and will vary in its degrees of being mentioned as well as detailed description of said scenes. Same goes for violence it will vary depending on intended audience, generally N.A. will have more descriptive violence while Y.A. will have action scenes but not a gruesome or violating violence occur in detail perhaps only just reference.

So there is my at length, really lengthy, explanation of the differences between Y.A. and N.A. The two genres are great and I enjoy them both. I know that I can rely on Y.A. books to be clean and great to share with anyone from my younger cousins to my BFFs. I also know I have N.A. books available to me which feature characters closer to my age and life circumstances lulling me into a great literary escape. Knowing the differences between the two genres is great, so you know what to expect and when to be disappointed.
Posted by hey, it was free at 11:30 PM