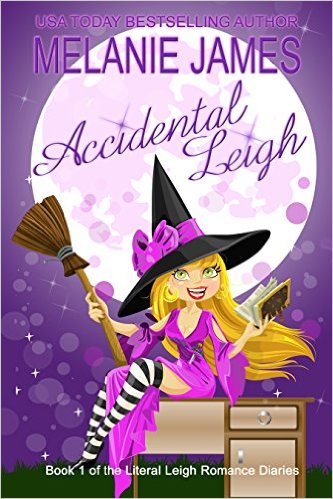 My Thoughts: Very Adult Version of Bewitched or Sabrina The Teenage Witch

Looking for an adult but quirky contemporary magic romance read than this book is it for you. The story is narrated by the female lead as she talks to you about her life and situations, which go from down in the dumps to crazy magical. The humor and situations are definitely adult themed and NOT for a younger audience.
Finding her date nights being centered around a book boyfriend instead of a real boyfriend, Leigh Epstein, doesn't think she settling when she chooses her werewolf-vampire Vlad over boring Carl. But then tragedy strikes when her beloved Vlad is killed off in her favorite series. Leigh in her midst of grief comes to the idea that she should try her hand at writing her favorite types of books. Taking her idea and running with it Leigh picks up a free desk and pens a steamy romance scenes. Only later does Leigh find out that those scenes she writes comes to life in the most literal ways of her imagination. With this new power Leigh tries her best to pen the best scenarios, but with good intentions still come grave consequences and things do go awry. Luckily Leigh may have one gift from her new magic, and his name is Hunter. The question is can he survive her new gift and can Leigh handle her magic?
Overall, okay read. Writing wasn't stellar but it made me chuckle her and there but was a bit too forward for me. I suppose Rom Com and my literature in general, still keeps most things at jokes and innuendos, but Leigh and her friends were a bit too lewd for me. I could handle the mistakes and Leigh rushing to fix them, but the situations were just not as funny as they were dirty. Now the writing style was unique as it may change your exception of the book since Leigh writes as if she's speaking to you at times and then goes about her day; which is a style some find a bit odd. Oh and the ending was nicely wrapped up and then BAM it went on toward something more to make a cliffhanger ending, so that was unexpected. So is you are looking for a more girlie grown-up Rom Com where the girl fixes her steamy writing that magically turns from fantasy to reality, then this book is for you but the series isn't for me.
Posted by hey, it was free at 8:30 AM