"Romance Thursday": Got Your Number by Stephanie Bond 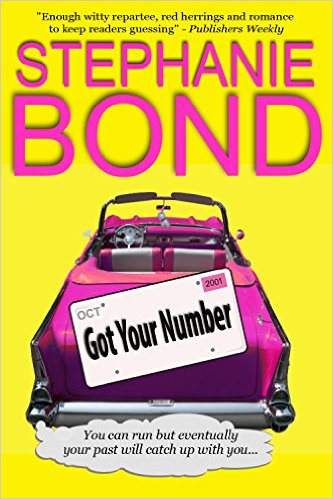 My Thoughts: Fake It Until You Make It!

This is not my first read written by Stephanie Bond and certainly won't be my last, but honestly if it had been my first of book I might have thought twice in trying her novels. The book was not as much a romantic read as it was a mystery thriller, which is okay but when I was in the mood for a RomCom, as it was listed under, and nothing really rang as funny, the story just felt off. However, I did enjoy the mystery for the most part since it did keep me guess until the very end.
Working odd jobs to pay for life as she helps rescue and relocate women from abusive situations, Roxann Beadleman, knows her life is unusual but its what she's chosen. Roxann runs into a very persistent detective named Joe Capistrano, who needs her to reveal the location of Melissa Cape, a woman whom Roxann helped flee from her husband. Roxann returns home to find her place upturned and a menacing message left on her computer, "I'VE GOT YOUR NUMBER, YOU FAKE." Finding a wedding invite from her cousin, Angora Ryder, Roxann realizes this is a great opportunity to get out of town and away from people who may be out to get her. What Roxann doesn't foresee is ending up on road trip down memory lane accompanied by her brokenhearted cousin both heading to their college homecoming where their confront past sins, new dangers, love and secrets.
Overall, good mystery not all that humorous. The moments that were supposed to be humorous were more sarcastic which is my cup of tea most days, but with the dual narrative from Roxann and Angora the novel was more dramatic than humor centered. The mystery of who was after Roxann was very well written, having multiple suspects with solid evidence against them made for an intriguing read. However the story seemed to drag for a while as the cousins battled with their inner demons. In trying to cover multiple points of emotional growth as well as the danger of the mystery and a murder, I believe the story builds to a point of too much was added to care anymore and you almost just want to get to the end. In the end the story was wrapped rather swiftly, but completed every bit of the plot without anything left open. So if you are looking for a read about two cousins who have a lot of baggage with them as they head out on a road trip where mystery and crime seem to follow as they try and figure out their lives, than this novel would be a good read.
Posted by hey, it was free at 1:30 AM