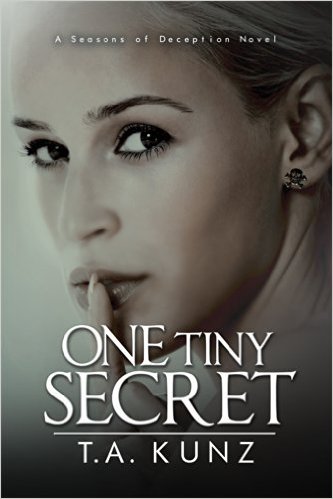 My Thoughts: Very Suspenseful Read, But Focused on the Who instead of the Why.

This story exploits the issue of hiding things and it coming back to bite you big time. The characters are mainly high school age but rather than distract it heightens the thrill of story knowing their lack of self control, clarity and maturity will play into their triumph or downfall. Kunz creates a story that builds each chapter as person after person is revealed to have a motive or  . .  . secret.
The story is told from the main character perspective, who is eighteen-year-old Danielle “Dani” Marks. Dani is the only daughter of the town sheriff and with that comes a lot of pressure to stay out of trouble despite wanting to be a normal fun loving teen just trying to survive high school. She works on the newspaper and has her sights on a great college. However, things begin to unfold one night after she reconnects with her old childhood friend and neighbor, Janice. They escape to a popular secret Halloween party in the woods, but while Dani tries to figure out her sudden reunion with her first love Parker Reed, Janice disappears. After the event of Janice's disappearance, Dani is flooded by threats and messages by a blackmailer who calls them-self Unknown. Things escalate from threats to physical harm after Dani refuses to bend to the blackmailers whims. The one thing Dani knows is she can't turn to anyone or trust them, because anyone could be the Unknown.
Overall, great suspenseful read with High School romance drama thrown in. I enjoyed the suspense and mystery part trying to figure out who the heck is Unknown?! The whole cat and mouse game got really messy and intense so that by the end I still was unsure who was involved, which is great since I hate cliche "I pegged it from the beginning" type books. However, the tiny secret which sparks the killer's need for revenge was kinda weird, and the other secrets mentioned weren't all that grand enough to become psycho launchers either in my opinion. Plus Janice and Dani's issue could have been explained in more detail, maybe in a flashback, because I'm still not clear on what all went down with those two, only that it festered there over the bitter years. Oh and the relationship between Parker and Dani always seemed more physical over emotional, which is probably why I wasn't rooting for them or find myself crying if they didn't get together. Okay so in the end the plot wraps up enough to have a reader take it for what it's is and you can still feel enjoyment from the thrill of the mystery. The point of this book for me turned out to be finding out who was the killer. So if you're looking for a suspenseful mystery involving high school drama in which you don't mind having the why kill answered in a semi okay way knowing the story is focused mostly on revealing the who's the killer, then this book is great.
Posted by hey, it was free at 1:00 AM