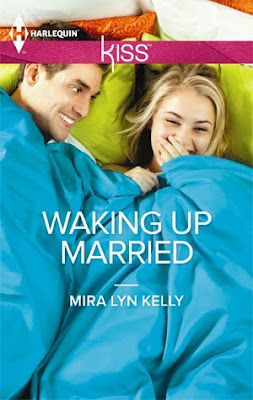 My Thoughts: Can A Marriage Be A Partnership Without Love When They Have Such Hot Chemistry?

Think "50 First Dates" meets "How to Lose A Guy In 10 Days" with a little historical regency ideas on love thrown in to make one fun romantic read. The characters have a lot of chemistry and the author directs them into a unique situation. The relationship is strenuous but appealing to the point that any romance reader can't help but read and hope for the couples HEA.
Waking up with a huge hangover and finding herself married, Megan Scott, now Mrs. Reed, quickly tries to figure out how she ended up married. Last Megan knew she was having drinks and a good laugh with the guy now rubbing her back as she regrets more than the drinks the night before. Megan is at a loss for how blotchy her memories are concerning Carter, she means, Conner Reed who is seeming too good looking for her to understand how he'd have married her. Connor on the other hand has pieces enough of the night before and remembers that he and Megan are refer for each other. However not in the romance type of way, neither of them find love to be essential to their lives, so he offered a great plan a partnership of marriage with no love involved to cater to their goals of family security and support. What could go wrong? Obviously lots when Connor tries to remind Megan of why she ever agreed to the Vegas Chapel wedding after they'd meet only hours before. Connor is certain Megan is his perfect companion wanting to keep her as his wife and he isn't above using seduction either. However, Megan is trying to be level headed by protecting herself and makes Connor work hard to change her mind in keeping the marriage. In the end the connection they feel for one another may turn out to be more than mere compatibility of goals or liking one another's "personality" and may in fact be something that neither of them was supposed to allow in the arrangement, which will mean what for their tenuous relationship?
Overall, I liked the book. It's an unrealistic romance novel. As in no way would a girl go to Vegas have a Britney Spears quick wedding and score the perfect man. Nope wouldn't happen, but this book is a nice read about a girl scoring that kind of a jackpot. Connor has a bad childhood and believes love is a messy emotion, so he never wants to venture into a relationship with that as a foundation. Megan too has a past that was not easy and finds herself hurt time and time again, so she wanted to cut love out as well. I'm like duh that's not gonna work out. The twos union is supposed to be based on respect, a connection and future family goals, but their chemistry screams lust that inevitably turns into. . . Yep you can guess. I just love how much crap Megan puts Connor through but he takes it all in stride, it seriously reminded me of "How to Lose A Guy In 10 Days." Their chemistry was stellar and Connor knows how to romance. But it's that last chapter that is just too cute. So if you're looking for a good romance that's got two characters denying this feeling of love but have great chemistry and are married, but not really yet want to be, yet are just getting to understand and get to know each other, try this book out.
Posted by hey, it was free at 12:30 AM