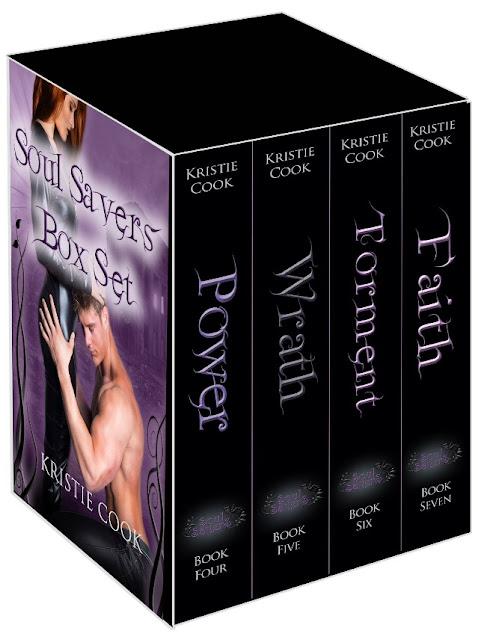 My thoughts: Grab it up! Great Last 4 Books in an Amazing Series!
Box sets can be a less expensive way to purchase a series and it's also a more convenient way to keep all your books together in one place. I love this series and the last 4 books in the Soul Savers series have to the be the most emotional and powerful. They will have you grabbing so many tissues, ugh I'm tearing up just thinking about some scenes. However, Kristie Cook does right by her readers and delivers hope amidst a darken world. Each title gives you a hint as to the story's and main characters emotional states. Oh and believe me when the title is torment it's TORMENT. All that to say, the end of the series is beautiful leaving a smile on your face and perhaps tears of joy. There is even a hint at more to come *fingers and toes crossed too, please let it be true. So if you haven't gotten into the Soul Savers Series yet, Kristie Cook has made it more attainable to become a fan by having box sets at such great rates.

As the Amadis prepare for war, Alexis returns to Florida with orders to relax, regenerate and replenish her depleted power. But she must also establish a new safe house, learn the art of conversion, find her AWOL protector, help a desperate fan, and protect her son. Oh, and figure out what's going on with her husband, whose peculiar behavior just might get them killed.

The stone in the pendant's unknown qualities make it a possible weapon in the wrong hands. With guidance and power from an improbable source and an unlikely ally by her side, Alexis sets out to retrieve the stone before the enemy discovers its potential for mass destruction. But when she finds herself in the Daemoni's lair fighting for her life, all hope seems lost. Will she discover the true power she holds in time?

As I curled my body around Sasha's, I realized the anger within me had changed. I no longer felt irrational and blinding fury that dulled all other emotions. But that was okay. I really didn't want to be Psycho Alexis. This, what I now felt in every cell of my body down to the core, was better. My anger had condensed and solidified into a cold, hard stone settling within me. Something I could control and hold onto for the long term to keep me going and focused on the goal.

That's what I felt. And there was nothing worse than the wrath of a pissed-off mother.

**My book review: Click Here**
When the Daemoni expose their existence to the human race, all Hell breaks loose. Literally. Not only do they walk the world freely, attacking at will, but they've infiltrated the highest levels of power in the human world. World War III erupts between countries and species, with Lucas, leader of evil on Earth, orchestrating it all. He even possesses direct control of thousands of soldiers' minds, setting himself up to take over humanity.

Alexis, still young and inexperienced, must lead the Angels' army to war. But every step she takes is trumped by Lucas, who single-handedly turns the humans against her Amadis. When Alexis and Tristan top every country's list of Most Wanted Terrorists, they are forced to go underground to fight this war. And their first mission is to free the human soldiers by breaking the link that allows Lucas to control them.

But the Four Horsemen have apparently arrived, bringing the world into the apocalypse. Can Alexis and the Amadis prevent Lucas from taking over humanity? Or is he truly the Antichrist, and the events tormenting the world part of an age-old prophecy that can't be stopped?

**My book review: Click Here**
Evil reigns the world. Earth's been ravaged. Only supernaturals roam the surface, while anyone else who escaped the fallout remains hidden deeply underground. The only signs humans survived at all come from those who serve the Daemoni. To finalize his conquest of humanity, Lucas prepares to rip down the veil between Earth and the Otherworld, opening the gates of Hell into the physical realm.

So why do the Angels insist on Alexis fighting a war that's already been lost? Defending a world that no longer exists?

With a soul that's been battered and beaten by both Heaven and Hell, Alexis holds on to a single conviction--her love for her family. Her only mission now is to save her husband's and her son's souls. Once she does, she'll plead with the Angels to allow them off this world God has obviously forsaken.

But has He? And can she give up on all humanity? Or will she find the faith she needs to win back the world? How far will she go to save the souls she loves...and those she does not? 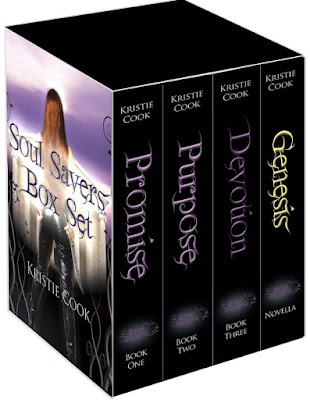