. 1
Price I Paid: Zip, Due to Amazon First Prime Subscription
My Rating: 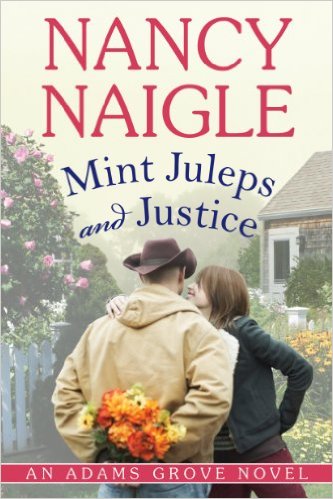 My Thoughts: Nice Read For A Summer or Lazy Afternoon.

I chose to give this book a 3.5 rating, not because this story was terrible, on the contrary it was good but it was just okay. The book just didn't leave that much of an impact on me emotionally after I finished reading it I was like "alright well that was nice and easy, what can I read next?" kind of a read. I mean there was suspense and a little bit of mystery as part of the plot, but overall it was just a nice read. Which if you are looking for a nice read for a cold winter, rainy or lazy summer day this book will do. It was just one of those books that you'll probably read once and be done with it, which is totally okay to read every once and a while. The story is part of a series, but it can be read as a standalone and you will not be lost, trust me.
Brooke Justice is in the process of rebuilding her life after a nasty divorce. Moving to the small town of Adams Grove, Virginia, where she hopes to escape her stalker and hateful ex-husband, Brooke plans on moving on with her life. However not too long into her new life Brooke finds she had a break in at her house. Needing to feel safe again she seeks help from the local private investigator, Mike Hartman, when the police are of no help. Mike is the one man that is making Brooke question her choice to swear off men to clear her mind and heart, but she's not alone in the struggle over not wanting their connection. Mike has just returned home from the military after trying to flee the heartache and Adams Grove for so long. As a private investigator he never thought someone would walk into his life and awaken feeling he's thought dead for so many years. Now both Mike and Brooke have to face their attraction and decide to let their pasts go to move forward, or let the past ruin their present; all the while keeping a sharp eye out for a danger that may be out there, which could end any chance they have at being together.
Overall, nice, easy, cute read. Truth is I hadn't read a book from this author before but I may try another from her, because like I said the story had good the characters that were likable, funny and not too frustrating like sooo many other romance novel lead characters are. I mean I even loved how the sex between Mike and Brooke wasn't heavily mentioned, which to me was a HUGE plus. Now another plus was the friendship between Brooke and Jenny, it was cute and funny which complimented the relationship that was building between Mike and Brooke. And the violence in the book wasn't graphic but was intense at parts making the plot ebb and flow or the story might have dragged a bit. So great storyline and plot planning on the authors part. So, if you want a simple but nice read about two people fighting an attraction but forced to work together to sleuth out a problem and then deciding to go for the relationship, then things get all crazy for a bit before the HEA. Then you'll want to add this to your library for a nice read.