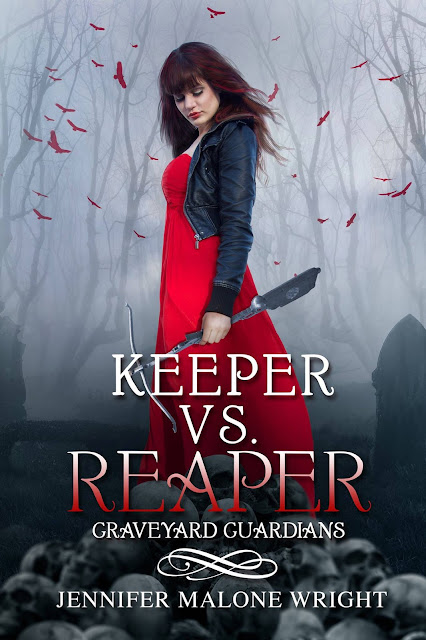 My Thoughts: Soooo Not A Keeper!

This book seemed promising, ratings were high and the cover looked great. However, the story was too crude for me to get through and the plot was obviously cliche. Now I rarely stop reading a book, but I couldn't continue with the story after the third sex scene occurred in a matter of 11 chapters and the main characters had only met once for less than 5 mins.
Reapers suck the souls from the living and dead; while Keepers save souls from the evil Reapers. Jack Walker is the son to the Empress and Emperor making him heir to the Reaper high leadership. He would like nothing more than to live his life for himself and away from his overbearing mother. Jack is sent to destroy the Chosen One, who is reported to be the youngest child of the Estmond Clan. However, meeting the "One" proves to be strange as he finds himself feeling a connection which can't be good for a Reaper where a Keeper is concerned. Lucy Mae Estmond is just trying to get over he fathers passing, but as a Keeper she has the duty to keep souls safe. Then her father appears to her as a new soul for her to keep with a message letting her know she is the Chosen One. Lucy hasn't a clue what that means or what to do with that info, so she begins to uncover the prophecy. Lucy also finds her life is now in more danger as she is no longer just a Keeper, but the one that could bring an end to the Reapers. Now if she could get rid of this pesky connection and feelings for a certain arrogant Reaper.
Overall, I can only fairly judge the book based on how far I read, but I forced myself to read until the main characters interacted, which took 9 chapters to make that happen. The language was too foul, almost overly so. Now I know people cuss, I'm not naive, but I really hate f-bombs being used so frequently. Then the perspectives changed up randomly to another character, which threw me. I really just kept waiting for the story to get going and instead Jack kept having sex again and again, but not with Lucy. Getting to the end of chapter 11 was hard and I finally decided the book wasn't worth my time. So if you're willing to put up with foul language, a slow paced plot, sex, and probably a cliche Romeo and Juliet Type Plot-line, Then you could try this book, but I could not finish it and have deleted it.
Posted by hey, it was free at 5:00 AM