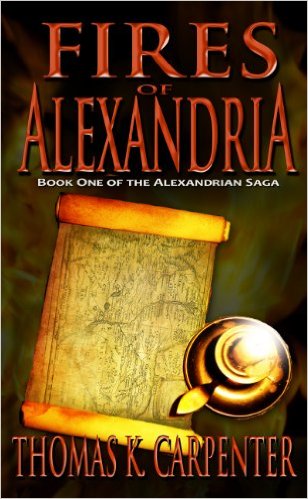 My Thoughts: Historical Fiction or Fantasy? Either Way You Are In For A Tale!

I'm always hesitant when reading historical fiction due to how the content can be misconstrued. Now this story goes from fictional heading into fantasy creating an alternate reality (of sorts). There are crazy inventions, cults, assassins, barbarians and hidden agendas all wrapped into a great tale based in ancient Egypt.
In a time when the Empire of Rome is oppressive and demanding more taxes, lives a man named Heron of Alexandria, also known as the Michanikos. Heron makes miracles for the temples, the miracles are advanced mechanics and machines, offering illusions to the people in order to bring money to the gods. The inventions are beyond anything or anyone has engineered before, problem is Heron isn't Heron. He is actually his twin Ada, who stepped in after his death. Taking on her twins person was the only way to pay her twins debts and continue to work as a great engineer. However, no matter how great Heron's inventions, there seems to be a curse on them as they all end in failure. It's not until a Northman named Agog comes to town and orders up war machines that Heron's life becomes truly endangered. Heron is then asked by a secret benefactor to find out the question of the century: Who set fire to the Alexandrian Library? That question and her association with Agog may be the start of an uprising and the death of those dear to Heron.
Overall, I liked the book, but couldn't really get into how far fetched it went out of historical context. I suppose that was my fault thinking the story was more historical than fantasy, though I liked how the author explained himself after the book noting what was fact and what was fiction or conjecture. The intrigue and mystery in the story was good, but there was a few parts I got lost in because of the technical jargon. I would have liked one plot line instead two mysteries in the story since the book felt like it was dragging on after the first mystery was solved. Of course it all came together in the end, but the length of the story started to make me lose a bit of interest toward the middle. I must say my favorite part of the book is the resilience of the main character. She is a strong female who literally mans up and out smarts everyone, she does amazing things even when death is imminent. Heron is just down right cray-cray. So if you are looking for a historical fantasy novel involving a main character who is insanely smart and is willing to basically do anything to protect her niece all while working under a fake name in an ancient world where knowledge is power and dangerous. This book would be fun to try.
Posted by hey, it was free at 11:30 PM