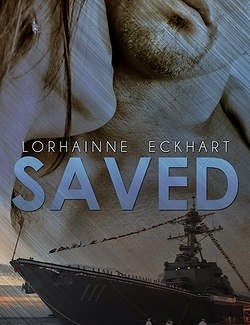 My Thoughts: Save Your Time And Money On Something Elsewhere!

The story had great intentions aiming to bring light to the issue of sex trafficking, but it was overshadowed and barely mentioned when another issue in the book took more precedence making the book lack as a whole story. Character development was surface for how deeply emotional the issues were in the story and I never felt connected to any character or really cared too much for how the story would all end. In fact the suspense of "will such and such happen?" never gets resolved and leads you to an epilogue that leaves you going "Umm, okay. Guess there's another book then."
Captain Eric Hamilton of the USS Larson finds a woman adrift on a dingy in the middle of the Northern Arabian Gulf. The woman is badly beaten and dehydrated, but most shockingly she is also very pregnant. After getting her bandaged up and able to talk he asks how she ended up where they found her and who she is, she informs Eric that her name is Abigail Carlton. Abby tells Eric that she was from Seattle before she had chosen to travel in Europe where she was abducted from a nightclub in Paris 332 days ago where she was then sold to an Arab man named, Seyed Hossein. Eric is old school in thinking about woman having their place in the world and doesn't believe they should be in the Navy, but he wholeheartedly believe men who do what was done to Abby are scum of the earth. The two bond and form a connection, making Eric promise to keep Abby and her baby safe even from the CIA if need be. However, there is also trouble on board for Eric concerning his views on woman as insubordination abounds and crewman take sides on issues concerning an allegation of sexual harassment, which if found guilty could render Eric powerless leaving all of them open to attack.
Overall, there could have been something to this book and I kept waiting for the plot to even out, but it just dragged on and got messier without complete resolution. Picking one issue to flush out would have been easier allowing the other to be the series arc plot line, but instead both were installed in this story and it made the book jumbled. Eric was repeatedly noted as chauvinistic and old school which was okay except when the author threw in romance trying to make him loving and caring too. Didn't match up. Especially since the woman he was vying for literally just got away from a guy who controlled every aspect of her existence and now she gets with a man who is just as controlling but does it out of love?! No woman out of sex trafficking would have been all for romance in less than a week, too unbelievable, especially for them having sex twice in the book, like come on *Eye roll. Oh and there was a whole accusation of sexual harassment case, there was a line in the book that literally had a character question the claims based on the captain being hot and the woman being a plain Jane so there was no way he'd have gone for her. Like WTH?!!! Like no, I can't even discuss that. So if you want to waste time on a book that doesn't seem to want to want in the first book and has too many main issues to end properly while having main character be a total jerk who romances a woman straight from slavery, then be my guest at reading this, but I will not be reading more in this series or this book ever again.
Posted by hey, it was free at 4:30 PM