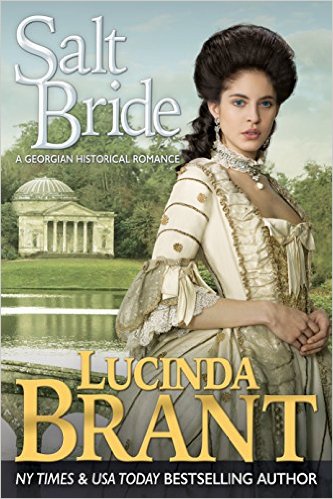 My Thoughts: Great Historical Romance Full of Imagery and Plot

As a lover of history I'm not one who loves historical romances most of time because the romance usually overshadows the plot and leaves me wondering: why have it set in the past if its all about sex? But Lucinda Brant is one of the few authors I enjoy reading particularly when it comes to Regency Romances. Case in point, this story has heartbreaking misunderstandings, threatening situations, great characters, well devised plots, and the HEA all set in Regency Era England.
Fresh out into society Jane Despard is the beauty all talk of and suitors begin lining up for, so when she is found with child her father knows it is not only her ruin but the family's name too. Jane is given something to expel the child from her womb, after the deed is done she is disowned and sent to live in the country with her step uncle in disgrace. Four years later upon her relatives death Jane is forced to accept a marriage proposal from the Earl of Salt Hendon as stipulated in her later step uncle's will to allow her stepbrother inheritance to be released. Becoming a countess should be a joyous occasion for a disgraced woman, but Jane and the Earl have a history that none know about. . . or so they think. It's their relationship and history that maybe the end of one of them especially when titles are on the line.
Overall, I just love how imaginative this historical romance is! Both characters are just so stubborn thinking this and that about the other because of their pain all the while as the reader you're like OMG! Just Freakin Talk!! But that's the good part because as you read how they unravel all the hurt and pain, they will finally begin to admit that they really do love each other. *Sigh, so romantic. Jane and Salt are so intense together its strangely wonderful, because all you want is the HEA they were deviously robbed of. Ugh! HATE that St. woman who is sooo not a saint. My only regret about this book is the perspectives change mid paragraph sometimes which makes it difficult to realize who is speaking, but it's a minor issue that you get used to, especially when caught up in the story. So, if you like a story were each wanted the other but someone stopped the message and dangerously meddles in the affair making the couple prolong their happiness, than this book is worth a read after all it is free for now.
Posted by hey, it was free at 6:15 AM